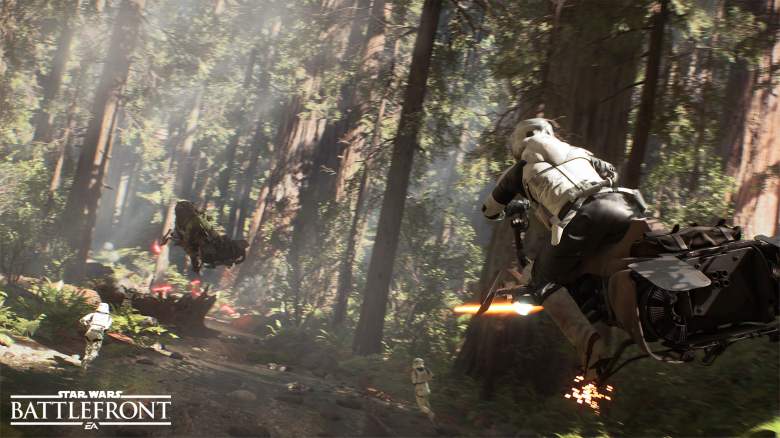 Yesterday’s big Star Wars: The Force Awakens trailer gave quite a bit of new information to Star Wars fans around the globe, but the biggest of which was that the original footage we saw was not of Tatooine as we all first assumed, but is a new planet named Jakku. And, even bigger news dropped today, courtesy of AP, just before the official Star Wars: Battlefront gameplay reveal: those that purchase Star Wars: Battlefront will receive free Battlefront DLC titled Battle of Jakku a couple of weeks before the movie’s release date.

Jakku is a battle-scarred desert planet similar to the terrain of Tatooine. The Battle of Jakku DLC will explore the moment following Return of the Jedi just after the New Republic confronted Imperial holdouts on the Outer Rim enclave. We’ve also learned that we won’t see this Battle of Jakku moment in The Force Awakens. Other locales teased in the game’s footage includes a snowy Hoth, Tatooine and Sullust, a lava-spewing planet merely referenced in Return of the Jedi and Star Wars books.

Other details have also surfaced tahnks to design director Niklas Fegraeus who said, “You can storm in as the Dark Lord himself. You can wield a lightsaber. You can Force choke the rebel scum, which is fun. Basically, you are the boss of the battle. This means that you, as Vader, can lead your team to victory — if you play well.”

Executive producer Patrick Bach also spilled some Battlefront 3 news and details by saying that X-Wings, TIE fighters, AT-STs and AT-ATs will be able to be driven in-game, and they’re working on balancing with the troops on the ground.