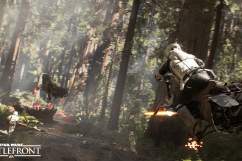 Star Wars: Battlefront is now officially our most anticipated game of 2015, thanks to today’s major Battlefront 3 gameplay reveal at the Star Wars Celebration 2015 in Anaheim.

We’ve learned a lot about what to expect from the new Star Wars game, which uses the Frostbite engine, and had our first look at the absolutely stellar-looking gameplay. We’ll be taking the time to dissect the trailer in more detail following the panel, but for now, you can watch the official Star Wars: Battlefront gameplay trailer via the YouTube video above.

I think it’s safe to call this year’s Star Wars Celebration a major success, since we saw the second Star Wars: The Force Awakens trailer yesterday and now Battlefront gameplay today. And, yesterday, it was leaked that the Star Wars: Battlefront release date has been set for mid-November.