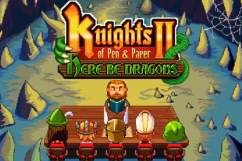 Here are the top 10 tips/tricks/cheats you need to know for Knights of Pen & Paper 2.

1. (Re-)Misspend Your Youth on Geek Culture

• The Knights series wears its nerd roots proudly. The game features references to League of Legends, AD&D and Mythbusters in its first 10-minutes. The more fluent you are in geekery, the more you’ll get out of this one

2. Three Roles to Rule Them All

• Leave a responsible adult alone with Knights of Pen & Paper 2’s character creator for any length of time, and they’re liable to come up with a party full of jocks playing elven wizards, rich kid-thieves, and dwarven cheerleader clerics. That’s all fine – the system is balanced to enable goofball character builds. Still, we recommend harking back to roleplaying orthodoxy: Make sure your party includes one character with a high blue “mind” score (cast-y), one high red “body” score (tank-y) and one high green “sense” score (stab-y) as soon as possible. Between these guys, your party should have a way to handle pretty much any encounter.

• Combat in Knights of Pen & Paper 2 is usually resolved in less than five minutes, but there are an awful lot of different things that can happen in those five minutes: big crowds of enemies will swarm you, strong boss characters will hammer you, healers and casters protected by a row of defenders will frustrate the heck out of you, and more. The same strategy won’t always work.

• Every starting character offers some crowd control skills and some that are more “nuke-y” for destroying individual targets. Some skills will have strategic implications like leaping over front-line defenders or causing burns, stuns and other special effects. In general, it’s a better idea to specialize than be a generalist. If your wizard can cast a “chain-lightning” spell that hurts a whole row of enemies, it might just be better for your hunter to invest skill points into the single-target “poison arrow.”

4. Craft Your Way to Happiness

• Every roleplayer worth their salt knows that the best gear can’t be bought in a store. KoPP 2 is no exception: the best loot is either won as quest rewards or built following recipes and materials found by investigating your environment. Keep an eye on your surroundings, and soon your party’s inventory will be filled with rings of ultimate might, collars of agitation, three-handed swords, and many more items that would make shopping T.V. show hosts drool with envy.

• Your party can have five characters, but you can unlock up to nine classes. You’re missing out if you don’t switch out a few of your existing characters from time to time. Half the fun of Knights’ battle system is to plonk a new class into your well-running party, and to watch how your tactics shift – much like the time Bob got sick of playing a barbarian and showed up with that warlock character on game night. Also, don’t worry about your new characters starting out at level 1! That’s what the side-quests are for. Speaking of which…