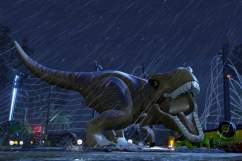 The world of LEGO has introduced gamers to playable hubs full of their favorite franchises, such as Marvel Comics, DC Comics, Harry Potter and more. On June 12, 2015, not only are we getting a brand new Jurassic Park film but we’re also getting a brand new game for the series.

LEGO Jurassic World is arriving this summer with the same enjoyable gameplay featured in the long-running LEGO game series. You can expect to explore a world filled with those recognizable LEGO bricks and encounter roaring dinosaurs. Fans will be able to play out the biggest moments of the entire move franchise and get a chuckle out of LEGO’s brand of slapstick humor.

The park is now open. Here’s everything you need to know about LEGO Jurassic World.

This new LEGO game release (which is being developed by longtime series developer Traveller’s Tales) will allow players to play through segments of all four films in the Jurassic Park series – Jurassic Park, The Lost World: Jurassic Park, Jurassic Park 3 and Jurassic World. The main gameplay featured in past games in the LEGO series (main story missions, free roam mode, puzzles, local 2-player co-op mechanics etc.) will pop up in LEGO Jurassic World as well.

2. There Will Be Over 100 Playable Characters

LEGO Jurassic World will allow players to utilize over 100 playable characters for use in the main story levels and free roam mode. Voice clips have been taken from each film to be used for the cinematics and character interactions in the game. Each of the characters allowed for player usage comes with their own brand of special powers that can be put toward solving puzzles and discovering hidden items. Some of the more standout characters that can be accessed in the game are:

3. More Than 20 Playable Dinosaurs Will Be Featured

Along with the huge array of human characters you can play with, players can also utilize a bunch of the dinosaurs seen in the films. There will be over 20 playable dinosaurs and some of them have their own special abilities. You’ll also be able to customize your own line of original dinosaurs. Some of the LEGO versions of dinosaurs you can use are the:

4. 20 Main Levels Will Also Be Featured

5. It Will Be Released on a Wide Variety of Consoles

This LEGO-ized rendition of the entire Jurassic Park films will be released on June 12, 2015 across several past and current-gen consoles. It will launch on June 12, 2015, which is the same day as the release of the newest film in the series. Check out the list below to see which consoles you’ll be able to play LEGO Jurassic World on: