Here are the top 10 tips/tricks/cheats you need to know for Stupid Zombies 3.

• Perhaps the most important factor to becoming a high-scoring zombie slayer! Never forget that for each additional zombie of the same color that you kill, a bonus point is added. Shooting two similar zombies gets you three points, while shooting three will get you six! Killing only four zombies of the same color in the same turn will up your score by 10 whole points! Try to get a Combo with each shot. Scoring one point on each zombie type per turn will not allow you to beat most levels.

• Much like Combos, Smash Kills are an essential tool of the pro Stupid Zombies 3 player. Crates can be tipped off ledges by your bullet, moving platforms, or gusty wind vents. When a crate or tire crushes a zombie to death, an extra point is added. A wheel can easily roll across an entire row of zombies, scoring an additional point for each zombie smashed! Even when a more direct shot is available, using physics objects to smash zombies is a winning strategy!

3. Grenades Can Be Tricky

• They seem to have a mind of their own, but a few simple techniques can help wrangle these bouncy explosives. First, grenades are most effective when each blows up a different group of zombies. As you become used to their movement, try to get them to each bounce to a different area of the screen. There is nothing more tragic than all your grenades ending up in the same empty pit! Secondly, grenades won’t rest on scaffolding, so shoot those zombies with the initial rocket shot. Finally, grenades often bounce right on by the group of zombies you were hoping to blow up. When possible, get your grenades stuck in a pit or corner to keep them near their target!

• Some shots require a steady hand (er, finger!). To prevent jitters and bumps from throwing a shot astray, use the Aim Lock to hold the shot in the same place. To use Aim Lock, hold another finger on the screen. You can then release the finger you used to aim the shot to fire the bullet, ensuring a perfect shot!

5. Explosive Barrels Get The Job Done

• Want to clear out a mob of zombies quickly? Just shoot the closest exploding barrel! This can also be the only way to kill zombies enclosed in brick bunkers, since an explosion reaches through walls and other barriers. Sometimes you’ll have to help bump the barrel into position, so look for ways to push or drop a barrel closer to your targets.

• Running around town all day artfully slaying the undead horde can make one quite ravenous. The Heroes of Stupid Zombies 3 all love to eat Burgers, and fortunately they are strewn about the city (don’t ask!) In levels where you are required to collect Burgers, take care to not shoot them. Try to keep the bullet contained, or well away from any vulnerable and delicious sandwiches. It’s often possible to make up zombie kills during the Last Stand at the end of the level, where you don’t have to worry about destroying any Burgers.

• If you realize you need more time to ponder your strategy but have already started to aim, you can drag your finger back to your Hero to cancel a shot. The targeting reticle will disappear when it’s okay to lift your finger.

• The locations of zombies are randomized each time a level is played, so it’s best to develop strategies to reach the parts of the levels most likely to maximize your score. Remember that the best angles are not always direct or obvious. Sometimes a great shot will seem counterintuitive, or require you to bounce off the floor in front of your Hero. If the zombies appear in difficult areas, don’t be discouraged; the next time you play the level it might be much more favorable!

• When possible, shoot zombies at the top of the screen, or those that are most likely to tumble down, setting other zombies on fire. A flaming head can roll far, spreading flames across the screen. You can work up quite the combo using this strategy!

• If there is only one zombie of a certain color on screen, it might be worth it to avoid killing it until the next turn. Another zombie of the same color may appear, turning two points into three! By the same token, it will often be tempting to pick off a solitary straggler, especially when the shot is easy and the zombie will move off the screen after the turn. Unless there are no other zombies on screen to shoot, don’t waste the shot! Frequently, there is a better combo to be had. 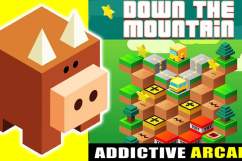 ‘Down The Mountain’: Top 5 Tips & Cheats You Need to Know