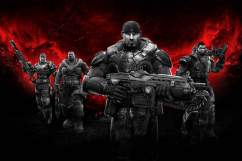 The age of HD remakes and remasters of our most beloved video games is in full bloom. While some re-releases have done nothing more than spruce up the graphics of last-gen classics, there have been respectable reissues that add a wealth of worthy content. The Coalition and Splash Damage took the original Gears of War and gave it the full remake treatment for the Xbox One. Reliving every tense moment that Gears’ heads still rejoice about looks and feels that much better with this Ultimate Edition.

Returning to the 1st major conflict between Marcus Fenix’s Delta Squad and the Locus Horde is an experience worth revisiting. With the remastered visuals put in place, every part of the game’s post-apocalyptic world looks phenomenal. The dirt, grime, heavy rain, dimly lit houses, blood splattered streets and more all look amazing. This is truly the definitive edition of a last-gen classic, thanks to its 1080p and 60 FPS visuals refinements. The much improved movie sequences are easier to look at, plus the intense gun skirmishes retain their shocking violence and gore. Having the original musical score and voice acting kept intact will do even more to honor your nostalgic memories of this excellent shooter.

Replaying one of the best games of the previous generation within this Ultimate Edition will bring fans back to the days of the series’ more horror-fueled elements. The moments that fans will look back on fondly, such as avoiding the darkness to avoid getting destroyed by the Kryll, are just as entertaining as you remember them being. Minor enhancements to the overall control scheme, cover-based mechanics and more will truly be appreciated by hardcore Gears fans. Now that console owners get the chance to play the original game’s five PC-exclusive chapters alongside the main campaign, you’ll have hours of co-op gunplay to look forward to.

The multiplayer options that exist within this HD remake are plentiful. On top of the co-op campaign playthrough, there’s a wealth of competitive modes. There exists Execution, Warzone, Team Deathmatch, King of The Hill, Blitz, Assassination, Annex and Gnasher Execution. Gears of War 3 fans will have much to get embroiled in with the addition of their favorite modes and familiar game features. With 19 maps to choose from (which have also received the same visual updates), you’ll spend an ungodly amount of time combing through multiplayer matches. The extras (cinematics, concept art and comics) are nice bonuses that fill out this edition quite nicely.

There’s little to complain about when it comes to this Ultimate Edition. However, there are moments where you’ll grow tired of the AI’s problematic action during the campaign. Playing it during a solo run is just as fun as doing with a buddy, but there are instances where your computer controlled partners have their idiotic moments. Watching your fellow Gears soldier stand in place while a turret continually puts them into a downed state is quite annoying. Situations such as this pop up from time to time, so its best if you tackle the campaign’s chapters in a co-op manner.

Gears of War: Ultimate Edition is the perfect treatment of a game that’s still highly regarded to this day. The redone visuals, original audio and extra playable story chapters fill out the still fun campaign even more. Mixing in the best control mechanics and multiplayer competitive modes from Gears of War 3 also makes this version the perfect one to return to. Dealing with the troublesome AI on your own provides headaches at times, but its not enough to push you away from one of the finest remastered re-releases in years.