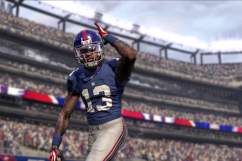 ‘Madden NFL 16’ Review: Another Solid Return to The Digital Gridiron

You know what game college professors despise? MADDEN! Every year within the month of August, a new annual installment takes over every college dorm room once classes begin.

Madden NFL 16 is making its move to past and current-gen consoles on August 25, 2015. Longtime followers of the series will allow its newest offering to take over their lives for several reasons – a new gameplay mode, refined elements of known mechanics and the same awesome pigskin action fans cherish. Developer EA Tiburon is ready to keep the ball rolling with another excellent entry in the Madden franchise.

Here’s everything you need to know about EA Sports’ return to the field with Madden NFL 16.

Unlike past years, Electronic Arts went a different route when it came to selecting its cover athlete for Madden NFL 16. Instead of allowing fans to vote on who they wanted to make the game’s official box art through a tournament bracket, players of Madden NFL Mobile voted through the use of collectible cards. This voting method was also utilized through Madden’s Ultimate Team console mode.

EA Tiburon has produced a new mode for this year’s entry that should instantly be familiar to fantasy football fans. Draft Champions mode allows players to play against human players or the computer with a custom team that’s selected from a huge pool of athletes. You’ll have to assign a coach to your team at the start of the draft and then fill out your squad with players in several key attribute areas.

On your 15th and final draft pick, you’ll get the chance to add one of three NFL legends to your team. It’s up to you to decide if one of your players needs upgrading or if adding more players to your lineup will cover more of your team bases.

The video posted above offers a visual overview of what Draft Champions mode has in store for returning/1st-time players.

Madden NFL 16 will once again feature past game modes and a few touch up’s of remaining mechanics, such as:

The video seen above provides more insight into what’s being done to make Madden NFL 16’s existing content an improvement over Madden NFL 15.

3. The Full Soundtrack Includes Artists Such as The Weeknd & Los

This year’s soundtrack covers a wide range of musical genres. Artists such as Fashawn, The Weeknd, Don Broco and Joywave have tunes featured all over this year’s installment. Here’s the entire listing of songs that will be featured on Madden NFL 16 (the link we’ve included here will take you straight to a playable YouTube playlist you can jam out to):

4. Pre-Ordering The Normal Version of The Game Will Bring You a Nice Set of Bonus Items

The most hardcore of Madden fanatics out there can go ahead and pre-order the normal edition of the game right now. On the pre-order bonus DLC front, players will receive three separate pieces of helpful items:

5. The Deluxe Edition of The Game Comes With Even More Bonus Items Than The Normal Edition

For those Madden fans who choose to spare no expense, the game’s Deluxe Edition is the best option to pre-order and purchase. The dosage of DLC that comes with this version is a ton of content Ultimate Team players will enjoy: