You know what hurts the most? Having to choose what games to delete from your hard drive to make room for new ones. We’re here to make sure you don’t have to go through that anymore.

There’s a great selection of external and internal hard drives available for Microsoft’s home game consoles. We went looking for five of the best picks for the Xbox 360 and Xbox One. You’ll be able to increase your hard drive space up to amazing sizes that are capable of taking in everything you download. After checking out these hard drive selections, you won’t have any issues installing any and all content in the future.

Check out our lineup of the top five best Xbox 360 and Xbox One internal and external hard drives.

Western Digital takes the 1st spot on this list with its Xbox One compatible My Passport X. This 2TB HDD works as an external add-on device that’s super simple to hook up to your console. All you have to do is plug up this device to your Xbox One, follow the onscreen directions and VOILA! You’ve just added a near unlimited amount of hard drive space to your Xbox One. The sleek design of this device and its black coloring match up quite well with the Xbox One, so at least it looks very nice while on top of your prized possession. Taking this HDD with you to other Xbox One’s and transferring all your content is such a simple task.

For the Xbox 360, here we have the 500GB hard drive for its dedicated users. As far as internal HDD items go, this media hard drive is compatible with the Xbox 360 E and Xbox 360 S consoles. Installing digital and physical games to your console’s memory becomes way less of a stressful affair once you own this. Pop this bad boy in to give you the much needed extra space your Xbox 360 requires. This HDD comes straight from Microsoft, which means its officially developed for the company’s last-gen machine.

Here’s our 2nd pick for an internal hard drive that works with Xbox 360’s. Even though it comes from Dragonpad (a 3rd-party manufacturer), you can trust them and their high quality peripherals. This internal HDD not only comes in the space size of 320GB, but you can also purchase it in these additional versions – 120GB, 200GB and 500GB. You can put this hard drive to good use with the Slim Xbox 360.

Hittime is the company behind this 250GB HDD model for the Xbox 360 Slim. The cheap pricing that’s tied to this hard drive means you have no excuse not to buy it. Go ahead and enlarge your console’s memory limits with this hard drive so you can download and install as much new content as possible. This selection is just as good and underpriced as our 3rd pick on this list.

This final pick works with the Xbox One just like our 1st hard drive on this list. The U32 Shadow 1TB external HDD is just as easy to hook up to your Xbox One as the My Passport X. You can get the 1TB edition or select from a few other sizes – 500GB, the silver edition of the 1TB, 2TB and a silver version of the 2TB HDD as well. They may come in higher prices, but you should know you’re gonna pay more for bigger space limitations. This HDD is backed by a 3-year warranty and it comes packaged with a carrying case. That’s all the protection you need when bringing this over to your buddy’s house if they have an Xbox One.

Buy the U32 Shadow 1TB USB 3.0 External Hard Drive for Xbox One here.

– As a bonus, make sure you purchase the Xbox 360 Hard Drive Transfer Cable. This item helps you transfer Xbox 360 or hard drive content to your new Xbox 360 S or Xbox 360 hard drive. Any and all HD movies, music, saved games, player profiles, and games from your old console can be carried over with this cable to your new Xbox 360. This one time purchase is all you need to transfer content easily and efficiently. 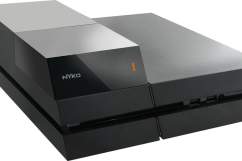