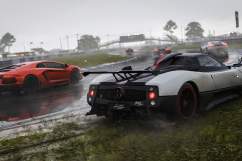 Can you believe that Microsoft’s premier racing game series is celebrating its 10th anniversary? It’s crazy to think that this racing sim has stood the test of time.

What better way to bring in the cheer and pop some bottles than by releasing a new Forza game? Forza Motorsport 6 is arriving with the same polished visuals, wide selection of cars and real-wold tracks it’s known for. The weather will play a factor in your final race standings now (THERE’S RAIN!), plus there’s more in store for fans to uncover. We’re all going to leave our “Horizon” road trip behind and get back to some serious racing.

Racing aficionados, we’re here to give you the full details on what you need to know for Forza Motorsport 6.

1. The Newest Feature For This Sequel are The Game’s Rain Effects

Racing under severe weather conditions feels and looks pretty amazing in video game form. Forza Motorsport 6 will add that element to races with wet-weather conditions. Certain tracks will feature wet spots that can greatly affect your vehicle’s performance. If you end up driving too fast over these puddles of water, you may cause your car to skid off the track or even hydroplane.

Thankfully, the puddles of water on specific stages never change their areas on the road. The developers designed that feature this way so that players can eventually remember them and deal with them accordingly. Development studio Turn 10 Studios took great care in crafting these rain-filled stages by replicating them after real-world tracks. Nighttime racing will also be making its debut with this mainline Forza Motorsport entry.

2. Showcase Events Will Make Their Return

During your time spent racing throughout Forza Horizon 2, you probably competed in one one one races against trains and even cargo planes. Forza Motorsport 6 is set to bring back that element in the form of Showcases, special races that feature all types of differing challenges. For instance, the Bondurant Autocross Showcases event category features a time trial where you’ll drive in a Mercedes AMG GTS while weaving through cones.

We’ve listed each and every Showcase category for you to uncover below:

These Showcases will place players into all types of vehicles and place them within races that feature laps in the double digits, bowling pin track challenges, competitions against Ultimate SpoCom rival racers etc.

3. 26 Global Locations Will Be Included

The total location list for Forza Motorsport 6 comes in at 26. Five of those 26 environments are new entries to the series – Rio De Janeiro, Daytona, Watkins Glen, Brands Hatch and a rebuilt 2014 rendition of Indianapolis. 10 entirely new tracks built from the ground up will be included this time around.

The track locations that have been announced thus far includes:

Your digital garage is going to be even more packed now that you’ll be able to amass more than 450 cars. The car manufacturers whose vehicles will be featured in the game includes:

The Ford GT supercar is the amazing looking automobile sported on the official cover for the game. Once again, you can peer under the hood and at the exterior of your collected cars within Forzavista mode. Some of the vehicles you can expect to floss in includes the 2012 Vanquish, 1983 Audi Sport Quattro, 2015 Corvette Z06, 2012 F12 Berlinetta etc.

5. A Special Xbox One Console Bundle Will Be Packaged With The Game

With another major 1st-party Microsoft Studios game on the way, that means another Xbox One bundle is arriving soon. The Forza Motorsport 6 Limited Edition console will feature a custom paint job and come outfitted with a 1TB hard drive. So what else is in the box? The list below will let you know just what you’ll get with this sweet console bundle: