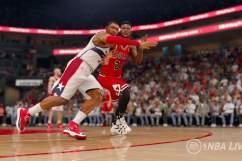 EA Sports has some fierce competition to deal with in the following two sports – soccer and basketball. On the B-Ball front, the annual war has always been between NBA Live and NBA 2K.

NBA Live 16 is ready to keep rebuilding the cred the series once had during its glory days. This next-gen basketball simulator is doing everything to tighten and improve several elements of what’s going down on the court. Plus, its showcasing two new online multiplayer options within its Pro-Am mode. EA Sports is taking its basketball game to another level that will probably put it on even footing with NBA 2K16.

Take to the court with us as we go through all the details regarding NBA Live 16.

NBA Live 16 is going above and beyond to make sure it’s online multiplayer modes are amazing this year. The 1st of those modes is “LIVE Run,” a 5-on-5 mode that features your created player front and center. You’ll be able to craft your custom player with the NBA Live Companion app and use its GameFace HD feature to transport your facial likeness into the game. Then you can equip your player with all types of licensed gear, take them on the court with up to nine online buddies and level up your skills along the way.

The 2nd online multiplayer mode comes in the form of Summer Circuit. This new online-focused co-op mode allows your custom player to compete alongside a squad of other players. This seasonal basketball circuit will pit you and your online teammates against amateur and pro-NBA players all over North America. Players will compete at a variety of real-world locales that are known for their basketball glory.

Summer Circuit’s authenticity is even more rock solid thanks to its inclusion of real-world, indoor basketball locales. When you play at each venue, you’ll actually interact with familiar NBA players who’re connected to that location. Each location comes with its own unique theme and appearance. Judging by how realistic Terminal 23 looks in the picture above, passerby’s will have a hard time discerning this game from a real-world pick-up game. One of the cooler aspects of each arena is their ability to alter the soundtrack as the game tempo changes over time.

The full selection of playable indoor B-Ball hotspots can be seen below:

3. The Game’s Passing, Dribbling, Shooting and More Have Been Improved

Several of NBA Live 16’s legacy features are once again getting revamped for this year’s edition. The offensive and defensive aspects of the game will be refined in order to further authenticate the intense blacktop play of the NBA. Check out the full details below on how certain aspects of the offensive and defensive strategies are being upgraded:

– Passing: new pass and catch animations have been added, plus the responsiveness of player passing has been improved

– Dribbling: new controls have been added for crossovers and hesitation dribbles

– Shooting: a new shot system has been added, which focuses more on the one-to-one button press of your shot releases instead of the animation itself

– Off-Ball Movement (“Live Motion”): the on-court player AI has been upgraded, which means they’ll be more attentive and aggressive. They’ll be more active by performing all the right tactics you’d expect of them in real-life

– A new Playcalling System: players can now access the in-game “Play Wheel,” which allows you to pick a quick play or open your team’s full playbook

– Quick Play: you can tap the L1 (PS4)/LB (Xbox One) button to run a recommended quick play that should make your chances of scoring higher

You can get even more intimate details on defensive play at the following link.

EA Sports has taken the current standings of NBA’s standout players and made sure their in-game stats match their real world position performances. Below is where you can find out how NBA Live 16’s players are ranked. The top five players for the following positions (Small Forward, Power Forward, Point Guard, Shooting Guard and Center) are as follows:

5. The Soundtrack Has Been Curated by DJ MICK

DJ MICK has been appointed the honor of curating NBA Live 16’s playlist. As expected, a nice selection of rap, hip-hop and R&B selections will be your soundtrack as you look to become an NBA legend. You can peer at the list below to see which tunes are making the final cut (head to this link to listen to each tune in succession):

Note – pre-ordering NBA Live 16 will grant you a bonus of $15 worth of Ultimate Team Pro Packs.