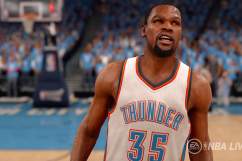 There lies a group of basketball diehards that get their game simulation action from one of two franchises – EA’s NBA Live and 2K Games’ NBA 2K. EA Sports’ line of sports titles have arguably improved over last year’s predecessors and continued to rebuild into something greater. That effort is quite apparent with NBA Live 16. Several new modes and on-court changes have been added to give this year’s title a fighting chance. But in the end, it once again falters to top the king of basketball sims.

There’s a lot of good here, though. On the gameplay mode front, the biggest new additions come in the form of Pro-Am’s two new playable modes. Crafting your own custom player is just a part of the fun. You’ll get to better them just by playing across a variety of modes and accruing universal points/currency. Your created player can hop online to either compete in 5v5 pickup games or compete against pro players alongside your teammates in Summer Circuit. The co-op play from these modes provides the majority of NBA Live 16’s fun, as you get to stunt and show your created player’s skills online with your friends/rivals. Summer Circuit is especially fun due to its more structured progression system. Competing in real-world indoor courts makes Pro-Am’s modes all the more special.

When its time to go fully pro and play with the NBA’s best, you’ll notice two major changes that are perfect for beginners and more seasoned players. The new shot meter gauges how successful your two/three-pointers and free throws will be. After a while, it becomes 2nd nature to find an open spot and release your shot once your percentage meets your expectations. On top of a visible shot meter, a new playcalling system has also been added. On the offensive side of things, you can choose any type of play you desire just by holding down a button and selecting it. The game also helps new players in this area by suggesting plays and pointing you in the positions needed to pull them off. These new gameplay additions and the improved ESPN presentation make each game appear as authentic as possible.

While NBA Live 16 make strides towards improving its overall game, several issues keep it from being on an even playing field with NBA 2K. You’ll grow tired of your unresponsive A.I. teammates at times. Half the time, they’ll clearly miss picking up easy rebounds or fail at blocking clear cut shots. You’ll find yourself doing most of the hard work at times due to your less than reliable teammates. The action on the court doesn’t look quite as smooth as its competitor’s game as well. Player physicality looks off, rushing down the court for layups or dunks look unnatural at times and block animations tend to look iffy. These problems stand out far too much and push newcomers away due to each issue disrupting the on-court action. Those looking for some sort of welcome changes to Dynasty and Rising Star mode will also be disappointed to see nothing has truly been altered for the better.

NBA Live 16 makes a good attempt at strengthening its comparatively weak game. The newest on-court features (a shot meter, the play calling wheel and recommended plays) does a good job of easing new players into the fold. The Pro-Am modes make hopping online a fun venture thanks to the presence of live players, obtainable goals and real-world locales. However, the action happening on the court gets disrupted by awkward physicality animations and your sometimes brain dead teammates. NBA Live 16 is solid, but it doesn’t do enough to truly evolve and make a play for being the best of basketball sims.