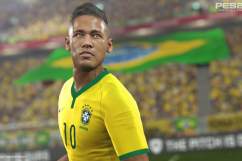 The immense passion, adoration and heartbreak soccer fans experience during close games must be experienced in order to be truly understood. PES Productions has slowly but surely improved every aspect of its Pro Evolution Soccer series, which easily elicits those same emotions when played. PES 2016 makes several adjustments to both sides of the on-field aspects responsible for creating legacy defining moments in such a revered sport. This latest installment’s retooled elements make it the strongest effort in the series thus far.

After spending several moments on the field, you’ll notice the improvements made across everything that matters. The more standout players that fans highly regard bring their attributes and signature playstyles to the forefront. The intricate approach to dribbling and other aspects of the game that pro’s such as Raheem Sterling and Sergio Aguero exhibit is incredible to see and wield. With such an attention to detail paid to the game’s more popular players, each game feels and sounds as realistic as possible. The physicality of this entry seems to have been altered in positive ways, too. Players jostling for ball possession, the presence of mid-air collisions and players going for header/volley attempts create more genuine moments that reflect the stiff nature of soccer.

The defensive game is strong and provides a challenge when you’re confronted by the A.I. They provide the right type of challenge that pushes you to take advantage of all your offensive options and your teammates assistance. A few slip-up’s on behalf of this aspect of the game brings you out of the action sometimes. Your defenders may go brain dead for a play or two and not pursue a loose ball, for example. But these occurrences are few and far between, so you won’t have to fret too much over random interruptions during defensive play.

The Master League and MyClub modes are better than ever. Master League excels with better simulation mechanics, player position affinity setups, a tighter presentation and more add-on’s that make you feel like the ultimate soccer GM. The presentation of important updates, player cutscenes and more complete a proper package with the deeper mechanics of managerial play. MyClub feels better than ever, thanks to a wealth of changes. Creating your online dream team is an addictive affair. Your squad gradually upgrades themselves just by getting time on the field, plus you can fit some of them into trainer roles. Managing your fantasy soccer squad is easier to deal with and filled with more options to take advantage of.

Pro Evolutions Soccer 2016 makes a great play for not only being the best soccer sim of all time, but for also being the best sports game of 2015. The athletes soccer fans attach their fandom to express themselves with their real-world characteristics. When combined with the bigger focus on player physicality and improved offensive/defensive options, everything on the field looks and feels much improved. The defensive side of play gets disrupted at times, but not enough to frustrate you to the point of no return. The entirety of PES 2016 is hard to pass up thanks to the wealth of game modes and the changes made to them. This is the ultimate soccer game. It’s easy to see who won the soccer sim competition this year.