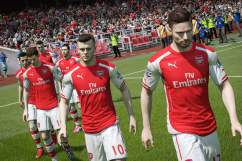 ‘Pro Evolution Soccer 2016’ Review: Excelling at The Top of Its Game

Some call it Pro Evolution Soccer, while fans in Japan have chosen to christen it Winning Eleven. No matter the name, Konami’s premier soccer (football, for some) series is back to hold onto its top spot on consoles.

Neymar of Barcelona dons the cover of PES 2016, an updated soccer simulator that’s launching on September 15, 2015. The visuals are as amazing as they’ve always been and the tightly knit gameplay is improving upon its solid foundation. With plenty of real-world soccer leagues/cups to play in and new stadiums to marvel at, PES 2016 is ready to rule the soccer gaming landscape once again.

We’re ready to dish out every tidbit there is to know about Konami’s Pro Evolution Soccer 2016.

1. The Physicality on The Field Will Be Amplified Thanks to an Advanced Collision System and Aerial Engagements

Pro Evolution 2016 is staying true to its “evolution” moniker by improving the mechanics based on player physicality. The player collision system will be even better thanks to the game calculating player interaction in real-time. When players collide, the proceeding animation will look as genuine as possible and not result in canned animations. The aerial battles between players will also offer up a new experience this year. For example, players will be able to counter much larger players in the air and simultaneously find the best position to land a header/volley.

On top of those two improved mechanics, PES 2016 will also include:

– Two new commentators: Peter Drury from the UK and Marco Hagemann from Germany

– Refinements to the Master League and MyClub modes

2. The Game’s One on One Controls Have Been Vastly Improved

One of the major mechanics getting a host of upgrades for PES 2016 is the 1V1 controls. You’ll have access to a wider selection of player movements that you can use to maneuver against other players. You’ll be able to utilize new feint tricks to get defenders out of your hair, plus defenders will be able to offset offensive players with “Perfect Defense.” This new mechanic will allow players who make perfect tackles to instantly acquire the ball right after. New techniques for both the offense and defense will create more interesting player exchanges across every game.

3. Konami Will Include a Slew of Real-World Soccer Leagues/Cups and Teams

Konami has managed to extend their licensing deals for the following soccer leagues/cups – the UEFA Champions League, the UEFA Europa League and UEFA Super Cup all the way up until 2018. PES 2016 will eventually feature the UEFA Euro 2016 league/cup at a later date. Some of the other exclusive leagues/cups that will appear in the game includes the AFC Asia Champions League, Copa Libertadores, Copa Sudamericana and Recopa Sudamericana. Check out this official link where all the licensed soccer leagues/cups and teams for PES 2016 are listed in full.

4. 11 Global Stadiums and Fictional Locales Will Be Featured

PES 2016’s playable stadium lineup will take players on another international skirmish against several teams. On top of the 11 real-world locales that will be included, 11 fictional stages made specifically for the game are also present. We’ve made sure to list each stadium you’ll be playing in once PES 2016 is finally within your grasp:

5. The Full Soundtrack Has Been Unveiled

PES 2016’s official track listing has been unveiled and it looks pretty respectable. The fact that Queen’s ultimate tune (which is heard in stadiums around the world) is included is commendable. Check out the 13 songs listed below to find out which tracks you’ll be jamming to real soon: