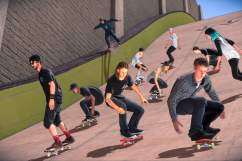 ‘Tony Hawk’s Pro Skater 5’ Review: Faceplanting Into Nothing But a Disappointment

Activision’s in the process of reviving one of its biggest IP’s – the digital skateboarding classic, Tony Hawk’s Pro Skater.

The 5th true sequel in the Tony Hawk series is a back-to-basics reboot. Instead of focusing on live skateboard controllers, a huge open world and more of the ideas used in the series’ spin-offs, the devs are returning to what made Tony Hawk’s games so addictive. The visuals have been overhauled to reflect the zany nature present in this trick-fueled, arcadey skateboarding game. Game developers Robomodo and Disruptive Games want to repair the goodwill for this series lost with past failed entries.

Hang out with us as we roll through every tidbit of info you need to know about Tony Hawk’s Pro Skater 5.

1. The Graphics Got a Cel-Shaded Makeover

If you’ve been following the development of THPS5 since its announcement, you may have noticed how its graphics have received an overhaul. The more realistic look of the game’s parks and skaters have been altered to now reflect a more cel-shaded style that looks more cartoonish. Some believe this makeover was a result of the fans displeased reactions to how the game initially looked.

Robomodo CEO Josh Tsui actually spoke to Gamespot and explained the change in visuals for the game:

We’ve always been confident in the look we were going for, but it took a while to ensure we could maintain the framerate with this style. It was essential that the game run at 60fps at 1080p, even with 20 people skating online in the same session. We’ve achieved that, so now fans are seeing a better-looking game.

2. The Bulk of The Gameplay Involves Completing Skate Park Missions and Participating in Online Shred Sessions

THPS5 won’t adopt the super deep mechanics seen in the more recent entries in the series. Like the 1st run of games, players will perform tricks, complete missions, collect anything and everything and discover hidden areas. Gone are the days of an open world to explore, a storyline to follow and a physical skateboard peripheral. On top of these classic game mechanics, you’ll also have the option to create your own skater and skate park. You can share your stages within the online stage community.

The stages and objectives you’ll take part in can be completed offline or online in a co-op or competitive manner. Up to 20 players can play within a skate park simultaneously. You can choose to focus on completing your missions alone or seamlessly challenge other skaters in competitive contests if you choose to do so. You can see the implementation of these awesome features in the video above.

3. 10 Pro Skaters Will Make Up The Main Playable Roster

This sequel’s lineup of skaters features a new slew of pro skaters and some returning ones. On top of the fact that you can create your own skater, here’s the full selection of real life skate athletes you’ll get to play as:

THPS5’s soundtrack will feature a familiar offering of artists that focus on the genre of ska, punk, grunge and other sub-genres of rock music. Artists such as Anti-Flag, Death From Above 1979, Harlan and more will make up the gamut of bands who’ll be in the game.

Check out the full list below to see who else’s music will be a part of THPS5:

By checking out this link, you’ll get to listen to each and every song you’ll soon be shredding to in THPS5.

5. Pre-Order’s of The Game Comes With an Exclusive Skateboard Design

Amazon pre-order’s of the game will gift players with an exclusive skate deck called the “Hawk Skull.” This skateboard design also comes with its own visuals effects trail when used in live play. If you choose to pre-order the game digitally over the PlayStation Network, you’ll receive a mix of iconic PS character heads that can be placed on any and all skaters. Check out the video above to see which PS mascots will make an appearance in the game.

As for those buying the game digitally over Xbox Live, you’ll also get access to exclusive character heads too. One of those heads features the likeness of a male character from Sunset Overdrive, plus the cartoony avatars of indie heroes Cuphead and Mugman.