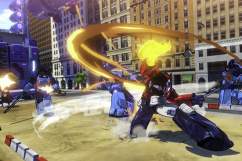 Platinum Games seems to be one of the hottest game developers out right now. They’ve stood out with critically acclaimed titles such as Bayonetta, MadWorld, Vanquish and more.

This Japanese game dev tried their hand at games based on licensed franchises with The Legend of Korra. They’re taking another stab at that sub-genre of games by producing a beat ’em up based on a popular 80’s franchise – Transformers. Optimus Prime and his heroic Autobots will once again fend off Megatron and his vile Decepticons. Everything we’ve seen from this beautiful action game so far has us immensely excited.

Here’s an inside look into the smashing beat ’em up from Platinum Games, Transformers: Devastation.

1. The Plot & Visuals Exhibit The 80’s Glory Days of The Transformers

The Autobot and Decepticon war rages on in Transformers: Devastation. Decepticon Leader Megatron discovers the power of Plasma Energy, which can be used to eliminate organic life and transform Earth into nothing but pure metal. Optimus Prime and the rest of the Autobots must band together to stop Megatron’s plan to Cyberform Earth and also wipe out his powerful army of Decepticons.

Retro fans of the Transformers 80’s run will get some nostalgic thrills from the visuals alone. The cel-shaded graphics practically exude the type of visuals you’d find on this legendary Saturday morning cartoon. Fans of Transformers: The Movie will love the overall look of this game the most since it inspired the art design of this beat ’em up.

2. Five Autobots Will Be Playable

The main playable cast you’ll roll out with are the Autobots. You’ll wreak plenty of havoc and do battle in your vehicle/robot forms with Optimus Prime, Bumblebee, Sideswipe, Wheeljack and Grimlock. The 1st four characters all have their vehicle forms to transform into and out of, while the legendary Dinobot Grimlock can change into a massive T-Rex. Each and every Autobot can dish out melee combos and pick off enemies from afar with their ranged weaponry.

3. The Original Voice Actors For Each Autobot Will Return to Reprise Their Roles

In another cool nod to the show’s early origins, the original voice actors for the Autobots have returned to reprise their vocal roles. Peter Cullen is back to voice Optimus Prime, Dan Gilvezan takes over the vocal duties for Bumblebee, Michael Bell plays Sideswipe and Gregg Berger handles the voice of Grimlock. Megatron and Soundwave’s voice will come from their original cartoon voice actor as well (Frank Welker). And finally, Andy Schmidt (former Transformers comic writer/editor) handles the story duties for the game.

4. The Game’s Main Portions Fall Into The Story Campaign and Challenge Mode

The main campaign will allow you to take control of different Autobots and send you out into wide open arenas. Judging from the many gameplay videos on display, you’ll pull off several eye popping combos and shoot down any Decepticons that step in your way. Boss fights will take place within the seven chapters you’ll play through (the 1st chapter’s boss encounter is against Devastator). The difficulty of this mode ranges from “Scout” to “Prime.”

The secondary Challenge Mode is where you’ll continue rampaging against your sworn Decepticon enemies. 50 total missions are encapsulated here, which tests your combat mettle and quick thinking by throwing difficult enemy waves your way.

5. Pre-Orders of The Game Comes With Extra Costumes and Weapons For Three Autobots

Pre-ordering a copy of Transformers: Devastation will net you three special character skins and weapons. The Nemesis Prime character skin comes with his Dark Star Saber Weapon, the Red Alert Skin goes into battle with his Photon Disrupter Weapon and the Goldfire character skin fights with his Gold Hunter weapon.