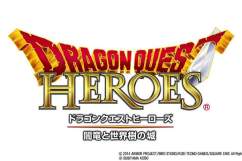 Besides the juggernaut RPG series that is Final Fantasy, Dragon Quest is regarded as one of the more favorable Japanese RPG franchises of all time. The series mix of whimsical characters, old school 1st-person combat, catchy tunes and Akira Toriyama’s art style have kept it going strong for years. Square Enix has decided to celebrate such an RPG staple with a musou action beat ’em up sidequest. With some extra hands on deck from Koei Tecmo and Omega Force, Dragon Quest Heroes emerges as one of the better examples of this franchise mashup in recent memory.

Presentation wise, Dragon Quest Heroes honors the visual decor perfectly. Even without the cel-shaded sheen of past 3D entries in the series, this side diversion from the mainline RPG’s still looks incredible. The environments, characters, text display and music all combine together to evoke everything that is great about Dragon Quest. You’ll elicit all types of cheerful moments as you hear familiar audio cue’s, such as the moment where a new party member joins your honorable crusade. Your party may feature new heroes made specifically for this game, but longtime fans will love the fact that past warriors pop up here (Jessica and Yangus from Dragon Quest VIII are playable, for instance). Dragon Quest Heroes does an awesome job of showcasing the best parts from its longtime run.

This action RPG does a awesome job of making you do a lot more than mashing the square and triangle buttons to death. Before you head out to your next destination, you’ll get to plan out your next move while situated atop a flying fortress. Like most traditional RPG’s, you’ll need to arrange your party, purchase new gear, chat it up with nearby NPC’s and more. When you finally head into battle, you’ll have four separate characters to utilize at your disposal. Each warrior comes with their own playstyle, which gives them all a varied collection of magic attacks and special abilities. On top of that, you’ll be able to amass monsters that can fight by your side. You’ll actually have to think about how to proceed on each stage, which is unique for most games within this genre. It’s refreshing to see the game throw all types of enemy hordes your way and give you more ways to vanquish them. The massive boss fights actually focus on targeting weak points, so it pays to bring in the right party members and pick your spots when they become available.

There’s so much to do here, but none of it is too daunting to overcome. As you unveil new areas on the world map, you’ll take on additional side quests, unearth more treasure and level up your party all the while. It does get quite addictive as you complete battle achievements, fulfill the requirements of random missions and getting fan mail for all your accomplishments. The sense of reward here is evident throughout every activity you participate in.

Storyline wise, there’s nothing within the plot that you’ll truly care about. It’s all light vs. dark, monsters going crazy, worlds colliding, blah blah blah. This cliched series of events is only used as an excuse to group up all the past characters from Dragon Quest’s storied past. There’s no need to pay attention to such a generic plotline. While there’s so much strategy tied to the battlefield, that feeling of repetition seeps in just like it does in other musou style game. Hacking and slashing monsters to death gets old after doing it for more than three of four missions at a time. Playing this game in short spurts is the best way to approach Dragon Quest Heroes.

Dragon Quest Heroes succeeds as another great collaboration project between a popular franchise and Koei Tecmo/Omega Force. The varied roster gives you all types of weapons styles to master, plus the more strategic mechanics tied to each battle actually puts your brain to work. Visually, this fully 3D take on the series as a whole looks amazing. Everything you’ve ever loved about this traditional JRPG series shows up in every facet of this beat ’em up. The plot that puts you on your journey is pretty weak, plus that familiar sense of repetition does rear its ugly head after repeated stage playthroughs. Dragon Quest Heroes is still a great take on one of Square Enix’s most celebrated RPG franchises.