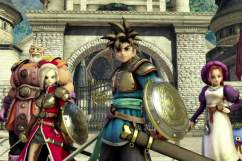 Developer Omega Force has taken their brand of Dynasty Warriors hack ‘n’ slash gameplay and tied it to several franchises over the years. Popular anime series and other gaming IP’s have all gotten to participate in the “one against many nameless baddies” treatment over the years.

Now one of Square Enix’s most legendary RPG series will be joining the party. Dragon Quest Heroes does away with the turn-based battles the franchise is known for and instead lets you hand out pain with repeated button presses. Mashing, dashing and saving the world is the name of the game here. There’s several familiar heroes to take into battle, cute Slimes to destroy or employ to your heroic cause and gigantic bosses to vanquish.

Here’s everything you need to know before you hop into the fantastical RPG action RPG world of Dragon Quest Heroes: The World Tree’s Woe and The Blight Below.

1. 13 Dragon Quest Heroes, Both Old and New, Make Up The Playable Roster

Dragon Quest Heroes features 13 separate characters from all over several entries within this RPG series. Five of the newest party members you’ll play with are all new characters being introduced to Dragon Quest for the 1st time – Luceus, Aurora, Doric, Isla and their cute Slime companion Healix.

The rest of the playable cast features characters from the other Dragon Quest games, such as:

2. The Overall Gameplay Adopts The Playstyle of The Dynasty Warriors Series, But It Also Features Unique Mechanics

Like the majority of Omega Force’s beat ’em up titles, Dragon Quest Heroes will put on a massive battlefield with plenty of enemies to hack ‘n’ slash through. However, a few mechanics that Dragon Quest is known for will be included here to differentiate it from the rest. There’s more of a strategic feel tied to the game. Before each stage, you’ll be able to purchase new gear, create fresh goods, talk to your party members and do more in an RPG shop encampment.

When its time to go to war, up to four playable character will be placed upon the battlefield. You can switch to any one of them at any point during battle, which is a good tactic since they each have abilities that make them better in some situations. Each hero and heroine can be leveled up over time. This in turn unlocks powerful magic attacks and new melee, stat boosting or healing abilities. These particular skills are even callbacks to the types of moves seen in past Dragon Quest games.

One of the last features that deepens the mechanics of this action brawler is the use of monsters. You can pick up Monster Medals throughout the campaign, which gives you the power to call upon various allies on the field. Up to 24 monsters can fight by your side at one time as you attempt to save your kingdom.

3. Pre-Ordering The Game Gets You The Day One Edition With Extra Bonuses

Putting your name and cash on the pre-order list for this game will get you the Day One Edition. This launch copy comes with a special set of DLC weapons that features Slime creature inspired properties. You’ll be gifted with the Slime Sword, Gooey Gloves, Goomerang, Squishing Rod and Gungenir weapons that can be equipped for the appropriate party members.

4. Loyal Fans May Want to Pick Up The Special Collector’s Edition

For the more devout fans of Dragon Quest, a special collector’s edition of the game can also be acquired. This goodie filled package comes enclosed within a real life Premium Treasure Box that includes the following items:

5. A Japanese Exclusive PS4 Modeled After This Game Can Be Imported From Japan

If you’re willing to dish out the importing cash needed to get something extra EXTRA nice, then this special PS4 console is what you need to spend it towards. This Japan exclusive PS4 500 GB console features a silver Slime design on the front. On the left portion of the system, it comes with a Slime drawing etched into the cover.

This silver PS4 is bundled with a matching DualShock controller that also features a piece of Slime art on its right bottom hook. And finally, this special console bundle arrives with a download voucher for the Japanese version of Dragon Quest Heroes. Make sure you have a Japanese PSN ID if you’re looking to download it yourself.

Head to the next page to check out a Dragon Quest Heroes infographic that displays details about each playable character!