BOO! Didn’t scare you at all, huh? After watching countless horror films and ghost hunting shows, we’re sure most folks have developed some sort of immunity to scary things.

Well if nothing truly frightens you or creeps you out anymore, video games may just do the job. Halloween 2015 falls on a Saturday, which means you’ll have the whole weekend to scare yourself and your gaming crew. We’ve collected 10 of the best games that are perfectly suited for this holiday filled with bountiful scares. There’s A teenage slasher flick to explore, A creepy mansion packed with zombies and even a post-apocalyptic wasteland that tests youR party’s survival skills.

Check out our picks for the top 10 scariest games you need to check out for Halloween 2015.

There’s always that recurring nightmare us and plenty of other people have regarding the end of modern civilization. Wasteland 2: Director’s Cut imagines our world being struck with a devastating nuclear holocaust in 1998. As you can imagine, the in-game world and its people now have to deal with mutated horrors, dangerous raiders and killing robots around every corner. This updated rendition of Wasteland 2 adds tons of extra content to the already dizzying amount of gameplay that’s already included. Amass your party of wasteland survivors, decide their fate and try to brave all the horrors of a post-apocalyptic world.

One of the more slept on 1st-person shooters of last-gen haas been given another lease on life with this current-gen collection. Metro Redux comes with two harrowing dives into the stressful aftermath of the Russian apocalypse. Metro 2033 and Metro: Last Light have both been rebuilt and remastered to not only look better, but play better thanks to control and game mechanics improvements. Ammo and clean air is scarce in the nuclear bomb stricken environments you’ll explore in both games. Keep your flashlight on and prepare for several unseen terrors in the underground tunnels of Russia.

There’s always a constant element of Halloween and horrifying things in general – ZOMBIES! Dying Light (which stands as a bona fide sleeper hit of 2015) places you in a wide open, urban setting that’s filed with them. You’ll run into plain ol’ walkers, super huge zombies carrying gigantic blunt objects, zombies that spit icky goo etc. From a 1st-person viewpoint, you’ll utilize your character’s parkour skills to keep those zombies and any additional enemies farther rather than too close to you. When it’s time to protect yourself, you’ll have a huge tool set filled with firearms and melee weapons at your disposal. Take on the zombie apocalypse with a friend online for some Dying Light co-op, folks!

Yep…MORE ZOMBIE KILLING! And this pick happens to be another package filled with hours of worthwhile content. Zombie Army Trilogy takes you into an alternate history version of World War II. Hitler is on the verge of defeat, which forces him to tap into the powers of an undead army. It’s up to you (and a friendly soldier if you have a friend who’s down) to wipe out every zombie you’ll come across with over 25 dangerous weapons. There’s three story campaigns to make your way through, plus you’ll get to test your mettle in this game’s version of Horde Mode. Stay alive as long as you can while you fend off an evil zombie army.

From Software (the geniuses who torture gamers with its excellent Souls series) took a detour with this PlayStation 4 exclusive. Bloodborne adopts the visual art style of classic H.P. Lovecraft and tests your will to survive in a dark Gothic world. You take on the role of a Hunter, who has to brave the creepily designed creatures of Yharnam. The difficulty is high here, but the feeling of satisfaction you’ll get after defeating a particularly tough boss is also high. This game is huge, which means you’ll have ample opportunity to discover new locales and face new nightly terrors. Bloodborne is the ultimate test for gamers who want to challenge themselves on Halloween.

This digital only game is jam packed with the type of scares that stay with you long after you’ve completed it. Tons of folks out there have a fear of the unknown, especially when that fear coincides with diving deep into the ocean. Soma combines both these elements and has you explore a mysterious underwater facility named Pathos-II. It’s up to you to find out what happened to the people that once lived out their lives here. Plus you’ll need to combat the A.I., plenty of monsters and a group of machines that take on the qualities of human beings. The mystery behind Soma is the type that you’d want to solve on Halloween.

Check out the PS4 and PC game page for Soma here.

You may not have even known about this, but yes…there’s a new Fatal Frame out and it’s a Wii U exclusive. And this sequel does something cool with the Gamepad by turning it into your spirit camera (the Camera Obscura). THIS TOTALLY MAKES SO MUCH SENSE! Maiden of Black Water has you take on the roles of two Japanese girls who travel to haunted villages. They encounter the lost and harmful ghosts of their dark surroundings while attempting to figure out just what led to their grisly deaths. American gamers can only download it via the Nintendo eShop, while Japanese and European fans can cop the physical copy if they please.

Of course we have to show love to the OG of survival horror games. Capcom moved its remake of the original entry in its long-running series over to last and current-gen consoles. To no one’s surprise, this move was a smashing success! This dark foray into a creepy mansion with either Jill Valentine or Chris Redfield is still as good as it’s ever been. There’s zombies, vicious zombie dogs with rotting flesh, rabid crowd, mutated Hunters and more bio-terrors to deal with. If you’ve never touched a Resident Evil game (SHAME ON YOU!), now’s the time to play through the series very 1st adventure.

If your prefer to tackle biohazard threats in an episodic fashion, check out the latest Resident Evil game – Revelations 2. Not only do you get to take control of Claire Redfield and Barry Burton once again, you’ll have the option to complete their respective adventures with co-op partners. This installment relies on the excellent 3rd-person controls of Resident Evil 4 and brings back the scares of the series 1st run of releases. There’s an overlying threat in power during your dangerous travels, plus there’s a new virus driving everyone you encounter to wildly attack you. Do your best to brave the horrors of Revelations 2 and try to grab the happiest ending there is.

Supermassive Games released a contender that could view for sleeper hit of 2015 just like Dying Light. Until Dawn is an exclusive PS4 adventure game that adopts the elements of all your favorite B-movie horror films. You switch roles among several young folks during a particularly harrowing evening in a log cabin atop a snowy hill. The story starts out slow, but it picks up immensely once you start to make important choices and figure out what’s really going on. Can you keep everyone alive or will someone die on your watch? It’s all up to you as try to survive…UNTIL DAWN! *insert evil laugh here* 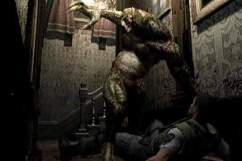