Nintendo has always managed to keep their handheld offerings in top form. For 2015, they introduced a much larger and graphically enhanced rendition of their 3DS with a “New” edition. With a newly upgraded pocket console came a handful of great games to play on it. The top 10 best 3DS games of 2015 cover a wide gamut of genres. Whether you’re interested in fast-paced Saiyan battles, co-op dungeon hunting or monster collecting, the 3DS library of handhelds has something to offer to anyone and everyone.

Dragon Ball Z has been experiencing a renaissance in 2015. Goku and his most revered cast of Z-Warriors and villains have appeared in a new film, a entirely new series and even a few new games. The 3DS got a portable 1v1 fighter that evokes the feeling of the old SNES DBZ fighters with Extreme Butoden. The 2D sprites stay true to the anime’s fast-paced battles, beam struggles and airborne clashes. The playable roster may be small, but the wealth of game modes and wide variety of assist characters are nothing to scoff at.

If you enjoyed the multiplayer dungeon crawling and rupee collecting of Four Swords Adventures, then you’ll love every minute of Tri Force Heroes. This 3-player Legend of Zelda adventure brings it back to the series top-down adventure gameplay that fans adore. Wandering through all types of puzzle filled caverns now involves you and your two buddies stacking on top of each other and using different abilities with multiple costumes. This 3DS Link adventure is perfect for gamers looking for some portable co-op fun.

This original 2011 DS release has gotten the ultimate overhaul for its port on over to the 3DS. On top of the content that appeared in the 1st iteration, Devil Survivor 2: Record Breaker features an additional story scenario, new character voiceovers and a much cleaner translation job. The dark plot of the Shin Megami Tensei franchise is present in this entry, which focuses on demons invading Japan. Fans of grind heavy RPG’s will be enamored with the monster collecting and cool “Fate System,” which helps you build relationships with party members and excel in battle.

The Etrian Odyssey franchise has built up a respectable following ever since its debut on the DS. Etrian Mystery Dungeon builds upon its series’ legacy with welcome changes and additional elements that makes this entry memorable. Making your way through a myriad of randomized monster packed dungeons is still an exciting activity. Classic character classes return, so you’ll need to master them all as you head into the new turn-based tactical combat system. Now that you can create safe havens (Forts) within each dungeon, you have more of a chance at surviving and conquering the dungeons you’ll explore.

Henry Fleming. The Lion from The Wizard of Oz. Tom Sawyer. Former President Abraham Lincoln. The one common thread between these fictional and non-fiction icons is a turn-based strategy release called Code Name S.T.E.A.M. Anyone who spent hours building up their army in games like XCOM and Valkyrie Chronicles will certainly spend just as much time with this game. You’ll push your Agents of S.T.E.A.M. across all types of battlefields and cut down the alien menace in your path. You’ll be enamored with the game’s cel-shaded visuals and wild cast of characters. The satisfaction you’ll get from winning a hard-fought battle is unparalleled.

So the new official hotness on the 3DS is a fresh monster collecting RPG called Yo-Kai Watch. Level 5 is the type of game developer you know is associated with quality games, so this entry on our list is as good as you’d imagine. The mysterious creatures known as Yo-Kai wander the world. You’ll have to locate them with some grub, down them in battle and attain their Yo-Kai Medal. From that point forward, you’ll be able to summon these whimsically crafted monsters and complete the missions given to you. The turn-based RPG combat, cute art design and addictive monster collecting will make you sink even more hours into your 3DS.

One of Capcom’s most revered releases on the portable gaming landscape today is Monster Hunter 4 Ultimate. The hardcore fanbase of this action RPG series can look to the 3DS and get sucked into the most featured packed entry to date. There’s an even larger variety of character classes and amazing weaponry you can craft as you take down massive beasts. The addition of Guild Quests ups the ante by providing each player with missions that cater to extreme treasure hunters. Equip your newfound Insect Glaive or Charge Blade and head into the wilderness to cut down some monsters.

Puzzle & Dragons Z, a mobile game that has done amazingly well on iOS/Android devices, has finally blossomed into a 2015 release for the 3DS. The main objective of this addictive puzzle dungeon crawler boils down to matching up orbs, pulling off the biggest combos and using your party’s special abilities to defeat your foes. The Super Mario Bros. Edition plants the Mushroom Kingdom’s most popular characters into the mix, so fans of the plumber and his crew will love this spinoff. It doesn’t matter if you’re a casual or hardcore gamer; this puzzler will grab gamers of any ilk and never let them loose.

One of the Wii’s most celebrated RPG’s finally got a new lease on life in 2015. With the arrival of the New 3DS XL came this 3D port of a bonafide classic. Xenoblade Chronicles 3D shocked us all by bringing over such a massive game onto a handheld device. For those revisiting or experiencing Shulk’s crusade against the Mechon army for the 1st time, this port was surely a treat. The added 3D visuals, music jukebox mode and animated model viewer are cool bonuses for a title that’s already packed with a great amount of content.

One of the darkest and most divisive installments within The Legend of Zelda series is Majora’s Mask. The mystery and intrigue that surrounds this entry’s true plot is still debated about to this day. The race to save the world before it meets its end presented time rewinding abilities, which shook up the usual Zelda formula. This 3D rerelease of an N64 classic does its deviation from the series’ norm justice. The upscaled visuals, touchscreen inventory access, gyro controls and refined time mechanics all make this the definitive edition to play. 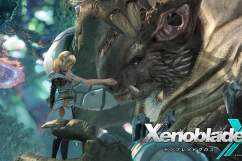