Action. A word that immediately conjures images of guns blazing, swords clashing and explosions going off. The Google Play storefront is packed with a great number of respectable action games you need to check out. For the month of October 2015, we made sure to give some love to five of the best new action games that were released. Prepare for hours of action packed experiences as you raid tombs, hack and slash and do even more. These are the top five best new Android action games of October 2015.

Major props goes out to Square Enix for porting the finest games in its library over to Android devices. The 1st Tomb Raider is playable, so it makes a ton of sense to bring over the sequel. You’ll command the world explorer Lara Croft once again and go on a quest for the famed Dagger of Xian. The textures have been cleaned up a bit, so this gives the game some new life as far as its overall visuals are concerned. Defend yourself against all global threats and enjoy one of Lara Croft’s earliest adventures.

Scooby-Doo, Daphne, Velma, Shaggy, and Fred have some new horrific adventures to throw themselves into. LEGO Scooby-Doo Haunted Isle finds the gang on a journey involving a mysterious treasure map and important LEGO key. This side-scrolling release lets you pair up one human member of the crew along with everyone’s trusty crime solving dog. Hop and bop through tons of levels, unmask baddies and discover the mysteries behind Haunted Isle.

Fantastical RPG’s are synonymous with the action game genre. Dungeon Crash employs elements of RPG battles, world building, party construction and more. With over 60 dungeons to explore, you’ll run into a wide range of baddies and collect plenty of hidden treasure. It’s up to you to save the Kingdom of Berman from the evils released from the Pandora Sword. Fight for supremacy, awaken your heroes, build up your massive kingdom and do your best in Dungeon Crash!

Ever played DOOM? Enjoyed a quick game of Quake or Left 4 Dead? Yes and yes? Then Dead Effect 2 should be a prime candidate for a new Android action game you’d enjoy. This shooter mixes up sci-fi and horror elements with fast paced, 1st-person gunfights. Some RPG elements are thrown in as well as you strengthen your character for the hideous threats he has to constantly face. The 20+-hour main campaign is on par with the length of FPS’s on consoles, so you’ll get a lot of bang for your buck here.

Hacking and slashing is the main approach to this new mobile release from Kongregate. Slashy Hero has been tasked with saving Halloween by hopping across 48 dungeons filled with scary enemies. You have to be quick on the draw as you crawl through space tiles, transform into different characters with costume changes and slash, slash, slash! Slashy Hero gives your hordes of ghosts, tombstones, evil jack o’lanterns and more baddies to hack at! 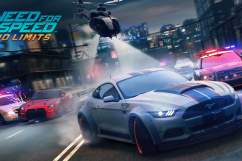