Street Fighter 4 has been around for a very lengthy period. Capcom has kept its tournament scene following healthy with numerous updates, newly added characters and various console ports.

The fighting game genre’s undisputed champion is ready to enter its next chapter. You’ve played the betas, watched the character introduction trailers and followed its overall progress. Street Fighter V is ready to hit the PS4 and PC on February 16, 2016. This next-gen fighter is ready to change the fighting game landscape with new fighters, unique combat systems and a traditional method for unlocking content.

To get properly prepared for the next installment in Capcom’s legendary fighting game series, here’s a preview guide for Street Fighter V.

1. The Game’s Launch Roster Features 16 Characters, Four of Which Are New

One of the most important (if not THE most important) parts of any fighting game is its roster. The hardcore FGC crowd has an adoration for Street Fighter’s historic character lineup and certainly has their favorites. The 5th main game in the series will officially release with 16 starting characters. The overall launch roster can be broken down into three tiers – legacy characters, surprising returning favorites and all new additions.

Check out the full lineup of characters that will be playable at launch for Street Fighter V:

2. One of The Newest Mechanics is The Game’s “V-Gauge” System

Every Street Fighter that’s ever been released has relied on old and new mechanics that deepens its strategic play. For this latest iteration, the newest mechanic on display is the “V-Gauge.” As players get damaged during battle, their respective V-Gauge meter will fill up. Three separate techniques revolve around this meter – “V-Skills,” “V-Reversals” and “V-Triggers.”

V-Skills are special maneuvers that are unique to each fighter (Ryu can pull off a parry, Cammy can pul off her spinning backhand, Chun-Li can pull off a graceful leap etc). V-Reversals are counter moves that every character can utilize while they’re being attacked (you’ll have to use a section of your V-Gauge to pull this maneuver off). And V-Triggers are special character abilities that, when turned on, use the entirety of one’s V-Gauge. Examples of V-Triggers are Ryu’s electricity-infused Hadouken’s, R. Mika’s tag team partner jumping in for attacks, Vega’s rose projectile tossing etc.

The “EX Gauge” makes its return. As in Street Fighter 4, players can utilize this meter to pull off EX versions of their special moves. This meter builds up over time as you land attacks on your opponent. Once you fill it up all the way, you’ll be able to pull off the game’s version of extra powerful super combos – “Critical Arts.” Focus Attacks won’t make their return for Street Fighter V.

3. There’s Going to Be a Concentrated Effort to Craft a Better Story Mode

Mortal Kombat’s last two releases featured an extensive Story Mode that was universally praised. The development team behind Street Fighter V has taken note of this, which is why they’ve made it clear that they’re looking to do its game’s Story Mode justice. Upon launch, each of the game’s fighters will have their tale told through the use of illustrations. This initial Story Mode presentation will provide some background info on Necalli, Ryu’s latest journey, Nash’s resurrection etc.

Once June 2016 rolls around, the Story Mode for SFV will be even more fleshed out thanks to a cinematic expansion feature. Owners of the game will be able to download and play through a newly added mode that utilizes fully animated cutscenes. This extra piece of free content will properly explain the events that occurred between Street Fighter IV and Street Fighter 3. 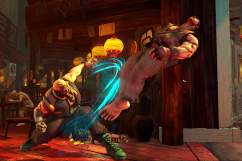 Sometime after the game’s release, Capcom will add six extra characters to the roster (the 1st DLC fighter will be available in March 2016). While their new looks haven’t been shown yet, we now know who those characters will be:

Capcom wants its Street Fighter fans to know that they can unlock these characters in two different ways – by playing the game naturally and spending Zenny to buy them or getting those DLC characters in one shot through the Season Pass. Check out the official description below to get more information on everything we just mentioned:

Also announced at the PlayStation Experience earlier today was the Street Fighter V 2016 Season Pass for PS4. The Season Pass will be available to purchase for $29.99 / €29.99 / £24.99 and will give players instant access to all six additional characters when they are released, as well as a premium costume for each and an exclusive PS4 theme. The Season Pass is available to pre-order now in North America.

There are two ways to receive bonus content in Street Fighter V – through Fight Money (obtained for free by completing various in-game challenges) and Zenny (purchased using real money and used to receive the content immediately). Zenny will be available to purchase in various options, some of which are listed below:

5. There Are Two Editions of The Game Up For Grabs; Special Pre-Order Costumes Are Also Available