2015 was a year full of even more open world gaming experiences, fun multiplayer betas and full release titles that were worth the hype. On the Wii U side of things, Nintendo once again made sure to give its fanbase a number of great 1st-party games. Mario and his buddies picked up their tennis rackets once again, humans fought to pave a new way for themselves on an alien planet and Super Mario fans finally got to produce their own side scrolling stages. Along with those examples are even more standout Wii U releases that we hope you didn’t miss. If you did, we’re here to remind you of the top 10 best Wii U games of 2015 you need to play.

It’s been a while since fans have been able to hop into an improved sequel within the Yoshi’s Island series. In 2015, fans of Mario’s cute green dinosaur got to explore his world in handcrafted wool form. The challenge factor is actually high, so older fans of Yoshi’s platforming will enjoy the later stages of the game. For the younger gamers, they’ll instantly fall in love with all the multicolored Yoshi’s and bright atmosphere. To be quite honest, fans of all ages will adore those factors and everything else about this cute platformer. The co-op feature makes this the perfect Wii U adventure that two couch partners should delve into.

Activision’s highly successful brand of toys come to life took a different approach in 2015. Along with a host of new Skylanders came the ability to hop into new rides. So not only were gamers able to smash and bash baddies, they were also able to take to the air, ground or sea in a variety of cool vehicles. The fast paced action RPG gameplay still remains as fun as ever, plus longtime collectors will be happy to know that their old toys can come along for the ride. Wii U owners really have it good since Donkey Kong and Bowser can join the Skylanders Superchargers festivities.

Music peripheral games made a resurgence this year. If you were open to trying out a brand new style of play for Guitar Hero, this pick certainly provided it for you. Guitar Hero Live ditched the cartoony visuals of series past and adopted realistic crowds that reacted to how good (or bad) you played on stage. Learning the new guitar made stepping out in front of thousands of concert goers a nerve wracking but always entertaining experience. Since its launch, new songs have been added so there’s a wealth of new material to play. Guitar Hero Live may have its issues, but its fun factor never falters.

The Fatal Frame series has always been more of a slept-on franchise in the survival horror realm. Now that more gamers are catching on to how horrifying and fun the series can be, they’re ready for newer installments. The Wii U’s Gamepad was tailor made for the next Fatal Frame, which is why we’re acknowledging Maiden of Black Water. This Wii U exclusive pits you against malevolent spirits that must be wiped out with the antique Camera Obscura. The Gamepad acts as your camera as you fend off a bevy of creepy ghosts looking to consume your soul. Solving the mysteries within Hikami Mountain is an scary trek you should definitely embark on.

Yoshi’s Woolly World isn’t the only game to adopt a carefully knitted backdrop in 2015. The follow up to Kirby’s Epic Yarn arrived on the Wii U this year with Kirby & The Rainbow Curse. This platformer features the same stylus-assisted gameplay seen in Kirby: Canvas Curse. Using your trusty Gamepad, you’ll draw out lines that put Kirby’s ball form on a pathway to collectibles and power ups. Kirby can still change into different forms, pull off attacks and swift dashing. The levels all look amazing, so you’ll get sucked into (pun intended) Kirby’s latest ball rolling journey.

LEGO Dimensions makes a run for one of the best toys come to life games released this year. What gives this game the edge over its competitors is the insane amount of franchises that are on display – DC Comics, Portal, Doctor Who and The LEGO Movie are just a few of the IP’s you can play around with. If you’ve enjoyed Traveller’s Tales line of past LEGO games, then you’ll appreciate the gameplay featured here. In true LEGO form, you can build your own vehicles and add new characters to your playable roster by placing them on the physical portal. With new stage and character packs on the way, now’s the perfect time to get on the LEGO Dimensions bandwagon.

Disney Infinity has already done a great job letting gamers live out their playground dreams with Disney and Marvel’s finest icons. Disney Infinity 3.0 not only allows you to utilize characters like Mickey Mouse and Spider-Man once again, it also includes entertainment’s galactic juggernaut Star Wars. The melee and racing mechanics have been retooled to make lightsaber battles and pod racing a more rock solid experience. There’s so much to play in this 3rd update – Star Wars’ Twilight of the Republic, Rise Against the Empire, The Force Awakens, Pixar’s Inside Out, Marvel Battlegrounds and the Toy Box Takeover.

The Super Mario series is at the top of the heap when it comes to the finest side-scrolling platformers. The 2D and 3D iterations of such tried and true hopping, bopping and mushroom munching has never gotten old. Super Mario Maker challenges its most ardent fans to create their own stages and share them with its huge online player base. You can choose to craft something simple or the types of levels that would make a grown mad shed some tears. Unveil your inner stage designer and make good use of this game’s awesome suite of level creation tools. Then try and see if you can beat some of the toughest courses Mario has ever seen.

This one completely caught us by surprise! Who knew that going into intense paintball matches with squid kids would be so fun? Splatoon moves away from the drab, bloody gunplay of most modern FPS’s and instead focuses on colorful paint splashing. You’ll need to mark your turf and keep any eye on the opposing team’s tactics at all times. The dev team behind this new IP has done an awesome job at including free DLC on a regular schedule. In its current state, there’s a crazy amount of customizable items for your personal Inkling and a nice array of stages to play on. Hop into this zany FPS and lay down some paint!

If you own a Wii U, you owe it to yourself to venture through the incredibly varied expanses of Xenoblade Chronicles X. This open world JRPG gives you and a party full of melee/ranged warriors the chance to face all types of mysterious creatures. There’s a wide variety of party classes and tasks that you can tackle that helps develop the reach of the human race on an alien planet. The battles move at an incredibly fast pace and the use of giant flying mechs make exploring this game’s world even more exciting. Xenoblade Chronicles X’s seemingly endless wealth of content will have you playing it deep into the new year. 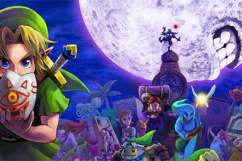