Marvel’s mightiest team of superheroes have enjoyed their reign atop the box office these past few years. The Avengers have saved the world countless times and have given everyone a hero (or heroine) to cheer for.

Another LEGO-themed game is arriving soon and features Marvel’s big screen adaptions of The Avengers. LEGO Marvel’s Avengers will follow the plotlines of the many films within the Marvel Cinematic Universe. On top of all that content will be expected bonuses, such as a huge open-world to explore, a vast amount of playable characters and LEGO-ized versions of your favorite Marvel characters. Traveller’s Tales is once again at the helm, so gamers young and old can expect another great LEGO game to add to their collection.

Check in with us as we give you a detailed guide on everything regarding LEGO Marvel’s Avengers.

1. The Game Will Focus on the Adventures Based on Six Films From the Marvel Cinematic Universe

LEGO Marvel’s Avengers is a spin-off from LEGO Marvel Super Heroes and it stands as the 2nd installment within the LEGO Marvel gaming franchise. This sequel’s main adventures will feature the heroes and villains that took part in the huge events for the following films:

2. Over Two Hundred Heroes and Villains Will Be Featured

Like the majority of LEGO games based on massive franchises, LEGO Marvel’s Avengers will provide comic book fans with a crazy amount of playable characters. Of course, Marvel Comics’ mainstays such as The Avengers team seen in the Marvel Cinematic Universe will be a part of the game. Their cinematic allies and foes (Quicksilver, Ultron, Loki, Winter Soldier, Falcon, War Machine, Vision etc.) will also make an appearance as playable characters. Longtime comic book fans can look forward to seeing more lesser known Marvel character in the game, such as Fin Fang Foom, Devil Dinosaur, The Collector, Crimson Dynamo etc.

3. Free Roaming Gameplay Sections Will Be Making Their Return

Like LEGO Marvel Super Heroes, LEGO’s Marvel’s Avengers will allow players to freely run around in certain open environments. Certain HUB locations will give players the chance to pick their favorite characters and complete side missions or just run around breaking objects in order to collect more LEGO studs. The free roaming areas featured in the game includes:

4. Some of The Game’s Spoken Audio Will Feature Dialogue From the Movies and a Few Respective Actors

Marvel’s Age of Ultron Prologue Cutscene | LEGO Marvel’s AvengersWatch this cutscene from one of the SIX Marvel films featured in LEGO Marvel's Avengers — Marvel's Avengers: Age of Ultron — and join the countdown to launch this month for more videos and commentary! Pre-order LEGO Marvel’s Avengers, available January 26th — http://www.gamestop.com/collection/lego-marvel-avengers “This opening scene really sets the tone for the game. As it's the start of the game we wanted a seamless entry from titles into action, as such it's a brilliant tribute to an amazing movie sequence, shot for shot it is authentic, action packed, immersive and fun…everything that LEGO Marvel Avengers is!" — Arthur Parsons, Game Director Learn More about LEGO Marvel's Avengers: Go to Website → http://www.lego.com/en-us/marvelsuperheroes Like on Facebook → http://facebook.com/LEGOMarvelVideoGame Follow on Twitter → http://twitter.com/LEGOMarvelGame Follow on Instagram → http://instagram.com/LEGOMarvelGame Subscribe on YouTube → http://youtube.com/LEGOMarvelVideoGame2016-01-08T17:15:51.000Z

LEGO Marvel’s Avengers will not only feature archival vocal audio from the films, the game will also incorporate new dialogue from the voice actors for certain characters. You can expect to hear the voices of actors such as Robert Downey, Jr. (Iron Man), Chris Evans (Captain America), Chris Hemsworth (Thor) and others as their best lines will be taken from the films they were featured in. Actors and actresses such as Hayley Atwell (Agent Carter), Stan Lee, Lou Ferrigno, Clark Gregg (Agent Coulson) etc. have recorded new vocal audio for the game.

5. Several Exclusive Characters Will Be Gifted to Gamers Who Pre-Order The Game From Select Retailers, Online Gaming Services or the Season Pass

There’s some incentive for pre-ordering the game from certain retailers. Gamers can also expect to nab a few bonus characters if they pre-order the game through Xbox Live or the PlayStation Network. The game’s Season Pass also gifts early adopters with some awesome goodies as well:

– Best Buy: pre-ordering the game will give players the Thunderbolts DLC Pack, which comes with Citizen V, Atlas, Mach 5, Songbird, Meteorite, Techno and Jolt. This character pack won’t be available with the Nintendo 3DS edition

– Season Pass: purchasing the Season Pass will gift players with 40 extra characters, five new stages based on Agents of S.H.I.E.L.D. and other assorted Marvel Comics storylines. This Season Pass will also give instant access to the Avengers Explorer Character Pack character pack, which comes with Scuba Captain America and Space Iron Man 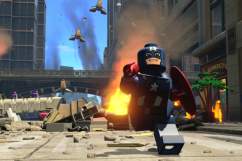 ‘LEGO Marvel’s Avengers’: The Screenshots You Need to See