The PS4 was home to a ton of genre spanning game releases this year.

There was a remastered collection that let you relive the most tumultuous treasure hunting adventures of Nathan Drake. For horror fanatics, there was an exclusive console release that allowed you to decide the fates of a group of young cabin vacationers. Plus, there were a bunch of Japan-only releases that finally made its way over to Sony’s 4th PlayStation console in the States. Littered among those fine releases were several excellent 3rd-party titles that everyone should check out.

We’ve compiled a list of the top 20 best PS4 games of 2015 you need to play. Some will agree and others will disagree, but everyone has to agree on this – this year was full of the best games ever made.

The Disgaea series has gained itself a loyal following due to its outlandish cast of characters and addictive SRPG gameplay. The 5th main installment launched in 2015 and marked the very 1st appearance of the series on the PS4. Disgaea 5: Alliance of Vengeance brings with it the same beautiful anime art style and hilarious dialogue seen in past entries. One of the game’s newest mechanics does a great job of making an alliance with your partners on the battlefield more meaningful (the aptly named “Alliance Attack” system). The explorable Netherworlds and implementation of Revenge Mode also do an admirable job of making this Disgaea sequel worth sinking your teeth into.

It was incredible on the original PlayStation and Sega Saturn. It became even more horrifying when it got remastered for the Nintendo GameCube. And now it’s an even better survival horror adventure thanks to its port on the PS4. The original tank controls are still available, but the analog control movement makes avoiding bio-weapons so much easier. The difficulty is still high though, so older fans will appreciate the dangerous mansion and the many terrors it throws your way. Resident Evil (HD Remaster) should be on every gamer’s bucket list. If you don’t know what a “Jill Sandwich” is referring to, this game should clear up any confusion you may have.

We didn’t realize how much we missed those plastic instruments until Rock Band took over our parties once again. The 4th main game returned and reclaimed its throne as the top music rhythm game on the market today. Rock Band 4 gave would-be musicians the chance to play out their most creative solos, plus the touring band story mode made us all feel like rock stars. The on-disc playlist featured some great songs, but the massive DLC track listing made this game even better. Pick up your guitar, pass the other other one to a friend, tell your buddies to pick up the mic or sit in on the drums and prepare to have a music filled shindig.

“Transformers…ROLL OUT!” The 80’s G1 era of everyone’s beloved robots in disguise finally got their just due in an awesome action game. And it just happened to come from the masters of frantic, action-packed gameplay – PlatinumGames. Transformers: Devastation was a short, but amazing experience. The melee combat yielded moments that elicited the most hype, especially when you slammed into someone in vehicle form in slow motion. When the game deviated from its hack and slash encounters, it threw us right into some interesting side scrolling sections and intense chase sequences. Do yourself a favor and give this one a whirl. It’s the best Transformers game to come out since the Activision’s Cybertron releases.

The Tales of… series has sent fans into mythical worlds full of medieval themes. It has also given them adventures that combine those aforementioned elements with future technology. With Tales of Zestiria, we got the chance to go back to basics and navigate the type of lands seen in traditional JRPG’s. Following the world saving trials of Sorey and his party led to a lengthy, worthwhile journey. The combo-heavy battles were even more fierce now that you can combine your powers with the Seraphim. The plot was engrossing enough to keep us enthralled during our quest to vanquish the Hellion threat and become the ultimate savior. 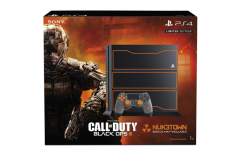 For the past couple of years, the devs behind the button mash heavy Dynasty Warriors series has adopted thier formula for other franchises. Omega Force has transformed both The Legend of Zelda series and the One Piece anime into more action oriented outings. They did the very same thing with one of the most beloved JRPG’s of all time and surprisingly released one of 2015’s sleeper hits. Dragon Quest Heroes not only retained the whimsical nature of its source material, it also added more mechanics to all the hack and slash proceedings. You could collect monsters to fight by your side, upgrade your characters to unlock new abilities and handle numerous duties upon a huge airship. We’re overjoyed at the fact that this managed to come over to the States. Here’s hoping for a sequel!

This late 2015 release left its indelible mark on us. Just Cause 3 let us join the rebellion and set off a chain of events that led to the downfall of Medici’s tyrannical ruler. We got our kicks just moving around Rico’s huge home island and blowing everything and anything up. There were so many creative uses for Rico’s varied arsenal. You could use a statue’s head as a battering ram, plus you could plant C4’s all over enemy landmarks and ignite them for a pretty fireworks display. You can even tie a soldier to a car to cause him to violently smash into it. Making your way through Just Cause 3 was a high stakes affair that improved as you got more explosive toys to play with.

Assassin’s Creed is back to being awesome again. Moving the stealthy series to the time period of Victorian Era London gave everyone some new ground to cover. Traveling around such a vast city meant we got to steal horse carriages and hop on rooftops much faster thanks to a new rope launcher. The two new sibling characters that fell under out control have magnetic personalities (especially Evie Frye). The gang warfare aspect makes its welcome return, so it feels great to grow your loyal allies in the criminal underworld. This sequel breathed some much needed life into a series that was quickly growing stale. We’d be all in for a return to Jacob and Evie Frye’s Assassin crusade in the next Assassin’s Creed.

The gaming world is highly anticipating the release of Nathan Drake’s 4th main treasure hunting adventure. Before everyone gets to see if he survives in A Thief’s End, Naughty Dog felt the need to get us up to speed on his past journeys. Uncharted: The Nathan Drake Collection features the main PS3 games he starred in – Drake’s Fortune, Among Thieves and Drake’s Deception. All three games look even more phenomenal with their improved visuals. If you’ve never touched an Uncharted game, this is the best way to experience them. Uncharted 2 is one of the best games of the last generation, so now’s the perfect time to give it a playthrough.

We had our doubts about this one. It started out as a PS3 Move title and its development time took much longer than expected. When Until Dawn quietly launched, we decided to give it a fair shot. We came away very impressed with its fun take on cliched, B-horror films. Until Dawn was a tense experience that truly made us consider our actions. Somehow someway, this game made us care for every character that was housed inside that spooky cabin (yes, even Emily). Although this game didn’t last very long, we were compelled to play it once again just to keep everybody alive. Don’t pass up the chance to play one of 2015’s sleeper hits. Do yourself a favor and play this in the dark with a loud screamer nearby.