Welcome to the new year! January is the official start of the new year, which signals the arrival of a bevy of new mobile games for Android powered devices.

On the action game front, a ton of incredible mobile titles landed on the Google Play storefront. The games we chose for this new list includes airborne gunning, fast-paced anime hacking ‘n slashing, 1st-person shooter anarchy and RPG skirmishes. The five action games we’re about to introduce you to offers awesome experiences to all types of mobile gamers. We’ve never steered you wrong yet, so trust our intuition on this new lineup of great action games.

Do yourself a favor, gamers. Make sure you play these top five picks of the best action-packed Android games released in January 2016.

Heading into the air and blasting ground units to bits in an armed helicopter sounds fun, right? It’s pretty easy to enjoy the explosive trials of such an activity in Gunship Strike 3D. This mobile shooter features some great looking visuals, so you’ll truly feel accomplished as you blast apart tanks and other grounded enemies. There’s an amazing amount of helicopters to gain over time, so you have a ton of powerful options to select from. With over 40 levels to engage in during Battle Mode and the hardcore Boss Mode, Gunship Strike 3D provides plenty of great gameplay for everyone.

There’s a lot of action/adventure games based on popular anime properties. One of the latest mobile games to adopt a beloved IP is Bleach Brave Souls. As far as fun hack and slashers go, this one’s near the top of the list for the best ones. Players will get to take control of several of the anime’s strongest swordsman, such as Ichigo, Rukia, Renji and more. The majority of your playtime within this release focuses on dishing out flashy attacks in a top-down, dungeon crawler setup. You can take teams of up to three into each stage and follow along with the story of Bleach.

Elite Killer: SWAT combines 1st-person and 3rd-person shooting elements to great effect. It’s up to you to wipe out an evil syndicate with your amazing variety of firearms. You’ll get to arm yourself with machine guns, submachine guns, sniper rifles, grenades etc. Every mission will involve you in some top secret global adventures, so you’ll travel from big cities and vast deserts. Your soldier will move from cover to cover, pull off amazing headshots, unlock 30+ weapons, engage in PVP shootouts and accomplish so much more. Elite Killer: SWAT should satisfy fans of military shooters.

The Demon Realm is full of huge dragons and plenty of formidable monsters. These creatures have taken an interest in your kingdom and have set out to destroy it. Clumsy Hero takes an everyday John and sends him on a heroic journey that turns him into someone extraordinary. This action RPG sends your hero onto moving stages where enemies will constantly step into your path. Attacking, defending and using your pets’ magical abilities relies on your active participation. No need to select an action and wait for the battle play out. Bash that attack button and time your defensive maneuvers as you march on to victory.

Crisis Action takes mobile 1st-person shooters into the eSports arena with this Counter-Strike inspired release. You’ll be able to squad up with like-minded soldiers and fight to become the top clan in the game. You’ll get to arm yourself with all types of pistols, assault rifles, grenades, sniper rifles etc. as you compete in action-packed multiplayer matches. Traditional PVP modes such as deathmatch exist, plus single-player battles against bots and the Horde Mode-like Zombie Survival horde mode are available. This online shooter has console game qualities, so mobile gamers will definitely become enamored with it. 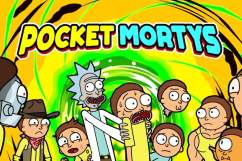