Pokemon fans got the announcement of a lifetime during the last Nintendo Direct. Now just a week after that live stream brought us news of Pokemon Sun/Moon, we’re getting another Nintendo Direct.

Fans should come to expect some updates regarding upcoming Wii U and 3DS releases, such as Star Fox Zero, Pokken Tournament, Metroid Prime: Federation Force etc. We know Nintendo is still holding its biggest secrets close to their chest regarding the “NX” and its mobile gaming initiative, though. This latest Nintendo Direct should hopefully be longer than the last one and give us even more exciting announcements to soak up.

Stay here with us as we all see what Nintendo has in store for the rest of 2016. 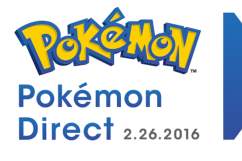 Read More
3DS, Games, Kirby, Namco Bandai, Nintendo, Nintendo 3DS, Nintendo Wii U, Star Fox, Wii U
Nintendo won't drop any new hints on its "NX" console or future mobile games. But we're sure this Nintendo Direct will give us new info on their upcoming Wii U and 3DS games.