Games are too serious nowadays. With so many game developers aiming to create harder games with a serious tone, and worlds so big that you’ll never discover everything it has to offer (looking at you, Witcher 3), it’s always refreshing when a game comes along to give us a break from what has become the new norm. Especially on the PS4, which is often referred to as the “hardcore” gamer’s console, it can be difficult to find something to play that doesn’t put the weight of the world on your shoulders. But now, Insomniac Games has the answer to the slew of overly serious games with their newest release, Ratchet & Clank. But does the unlikely duo of a lombax (it’s a wombat, guys) and his small robot friend still have what it takes to make us want to battle galactic enemies, or is their PS4 debut just more of the same?

Luckily, Ratchet & Clank is the most refreshing game in recent memory, and it exceeded the expectations I had going in. After all, a game based on a movie based on a game has literally never worked before (see: every other movie-based game, ever). There’s a lot to love about this game, but its most endearing quality is the fact that it doesn’t take itself seriously — at all. Just five minutes into the game’s story, and Insomniac’s writers take it meta. Instantly, the tone for the game you’re about to play is perfectly set.

This re-imagining of the 2002 PS2 game is truly a re-imagining in just about every way. It expands the original’s story — mostly to incorporate some of the ideas from the upcoming animated movie — and it adds new, imaginative weapons and enemies. It’s not just point, shoot and kill, either; you’ll definitely face challenging foes, with ammo shortages requiring you to get acquainted with the many different weapons the game has to offer. Even on the normal difficulty, Ratchet & Clank is still challenging at times. For the most part, you’ll play as Ratchet, blasting your enemies with a variety of guns (my personal favorite being the new Pixelizer). Some of the guns will feel familiar if you’ve played the original game, but for the most part, the game feels fresh. You’ll also play as Clank for a few portions in the game. He’s mostly there to solve puzzles and assist Ratchet in his adventure, but there are a few runaway action sequences that add variety to the gameplay.

Speaking of variety, Ratchet and Clank offers quite a bit of it. You’ll traverse atop a moving train, take on bosses and mini bosses, partake in hoverboard races, and even pilot aircraft. It’s all a welcome break from fighting through waves of enemies, and even in the game’s final hour, your gameplay still has new elements. What’s more, there’s a robust upgrade system to play with that allows you to tweak your guns to your needs. If you find yourself frequently running low on ammo, or your gun just simply isn’t as strong as you think it should be, you’re able to upgrade it as you see fit. Enemies drop bolts which you’ll use for these upgrades, as well as purchasing new guns. Furthermore, there’s holocards to be collected that add skins and added power to your guns.

Visually, everything about the game is stunning. Aside from the occasional technical hiccup, you’ll be awed at how great the world and characters look in the game. The cutscenes look like they’re taken from a Pixar movie, and the various worlds are colorful and unique.

With a franchise as beloved as Ratchet & Clank, it can be tough to introduce established characters to a new audience. But this latest outing should be considered the quintessential Ratchet & Clank game, and hopefully Insomniac has plans for a follow-up in the next couple of years. It’s a needed breath of fresh air for the PS4, and when you pair its gameplay variety with its graphical fidelity, you get an all-around great experience. We also have to factor in that the retail price for the game isn’t a full $60, but instead, it debuts at $40. So when it’s all said and done, Ratchet & Clank is easily worth the price of admission. Come for the cute furry lombax and his new little robot friend, stay for the cool guns. 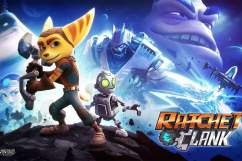