DOOM. Any PC gamer who’s spent enough time getting acquainted with that word knows what images it evokes. Blood splattered labyrinths, hideous demons, a rocking soundtrack, a double-barreled shotgun, the almighty BFG etc. immediately come to mind. Bethesda Softworks managed to breath new life into one of the FPS genre’s innovators (Wolfenstein) once before. id Software has now managed to do the same with a franchise that hasn’t seen a major release since the remastered third entry. DOOM knows what it is and embraces it proudly. This makes the experience spent with it engrossing, while staying retro and modern all at the same time.

Most shooters these days employ the use of gripping storylines, wider environments and more modern mechanics. DOOM keeps things simple while also featuring a wealth of content that makes it a step above its predecessors. As soon as you break away from your chains and outfit yourself in your new battle gear, you’ll become obsessed with everything happening in front of you. The main plot point is easy to grasp – bad things are happening on Mars and the many denizens of Hell have a part to play in it all. The story isn’t some sweeping tale that will pull you in, but the incredibly smooth movement and amazing gunplay makes DOOM campaign such a good time.

As you navigate around each area, you’ll routinely encounter a wealth of demonic hordes. At first, you’ll run into the type of demons that don’t require much headwork to destroy. But the game constantly throws new challenges your way, which helps the action stay fresh for hours on end. There’s such a refreshing feeling to the game’s proceedings as you pick up a new firearm, discover weapon trials that award you with upgrade points and locate tons of Easter Eggs. It may become routine when you tear down a demon spawn device over and over. But the enemy variations thrown at you switches things up and forces you to change up your strategies. The single-player campaign is lengthy, but it doesn’t overstay its welcome. DOOM obviously sticks close to what made it such a household name, yet it manages to introduce new mechanics that helps it stand alongside today’s current crop of shooters. 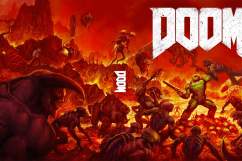 Once you’ve put in enough work on a solo level, you’ll want to tap into your more creative side and produce some levels of your own. The SnapMap mode isn’t just some half-assed level creator. You’ll get the opportunity to create your own stages and also develop your own game modes. There’s so much more enjoyment to be had here since you get to play through your own creations as well as everyone else’s. Sit down with this mode’s creation suite long enough to grasp its finer points and you’ll find yourself making amazing stages in no time. The potential for SnapMap mode is limitless, so we expect to see and play even more unique creations in the future.

The last bit of DOOM focuses primarily on the online competitive multiplayer mode. While it provides the type of fast, run n’gun gameplay seen in classics such as Unreal Tournament and Quake, it never manages to stand out as a more unique endeavor. You’ll play through a slew of modes (Soul Harvest for example, is a Kill Confirmed -like mode) that start out fun…at first. The longer you play though, the more you’ll notice how unremarkable the multiplayer portion really is. It’s passable, but not great enough to keep you enthralled months down the line. Turning into demons is certainly cool. But the generic feel behind the rest of the multiplier feature set can be felt throughout. This part of DOOM feels like it’s there just to be there and nothing more.

DOOM has reared its demonic head once again and we’re glad it did. It’s easy to see that a great deal of attention was paid to the single-player campaign. It’s long enough to keep you enthralled, plus the intense pacing never slows to a crawl. The environments display the horrors of trying to wield the powers of Hell in a very graphic way that you’ll come to appreciate, the action constantly moves at a fast pace and there’s so much to unlock. SnapMap gives creators so much more to do even after they’ve played the game at its most crushing difficulty. However, the multiplayer suite falters due to its blasé feel. DOOM is still worth hopping into due to its perfect mix of old and new school FPS workings.