Faith isn’t just a parkour master; she’s also a very capable fighter who can make quick work of her opposers. Even though the individuals that try to stop her utilize firearms and other offensive tools, she still has the ability to fend them off. Mirror’s Edge Catalyst looks to build upon her physical prowess by introducing new combat modes and more abilities that make her even more of a force to be reckoned with. In our final interview with Gameplay Producer Jeremy Miller, we got plenty of info on Faith’s upgraded movement and combat maneuvers.

What led to the decision to completely emit the use of guns from combat?

It came down to who Faith is and what makes her such a unique video game hero. She is a rare combination of elegance, power and determination with fluid movement and combat in 1st person being a pillar for us right from the beginning.

We knew we wanted to take a risk and innovate with our combat to produce something that no other game has done and create something that really felt true to Mirror’s Edge and Faith. From there we honed it down and our decision to create a momentum based 1st person melee system was something we really believed was the right thing for Faith. It needed to be intuitive, skill based and an extension of our movement while also allowing combat avoidance or “running away” to be just as engaging and valid an option. I admit it was very, very hard and required a lot of very experienced and talented people and a bit of Faith. I really am very proud of what we created.

Does Faith employ the use of any new tools?

There are a number of gadgets and tools that Faith uses in Mirror’s Edge Catalyst. She now has the ability to “Shift” which is a short burst of acceleration in any direction that can be used to tweak moves. It’s perfect for quickly recovering from a hard fall or avoiding an enemy attack.

At the heart of the runner community is The Beat: a pirate augmented reality system that makes use of a lens, earpiece and wireless system within her glove. Early in the game Faith gets access to the MAG rope that is used to move across large gaps and highways, and, as it’s upgraded, provides access to places that would be impassible otherwise. It truly is an extension of her moveset that utilizes her momentum and, while very simple to use, has a lot of room for player skill. Faith is also able to upgrade her glove to perform offensive actions like Disrupting KrugerSec tech, communication and AI systems.

Describe how Faith can utilize her Focus Mode capabilities during combat. What are some of the melee-based attacks Faith has in her arsenal?

Faith’s Focus and Speed go hand in hand: all of her attacks change depending on momentum. We refer to them as Attacks and Traversal Attacks. She is always more powerful when she is moving and more vulnerable when standing still. Her Light Attacks that focus on moving through an enemy without losing speed and or quickly taking advantage of opportunities when an opponent is off balance. Alternately her Heavy Attacks focus on transferring her momentum into her opponents, causing high amounts of damage when and sending them stumbling.

While we do have unique finishing moves for virtually every type of attack she has, none of them are lethal! Faith fights if she has to as part of achieving a goal, violence is not the goal itself. 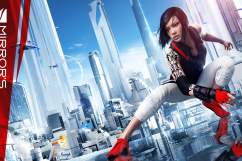