Mirror’s Edge Catalyst Story Trailer – I Am FaithLearn more at http://www.mirrorsedge.com Faith Connors is a self-assured thrill-seeker and one of the best Runners in the city of Glass. But Faith’s carefree days are numbered. As she crosses paths with the evil Gabriel Kruger and the city’s oppressive Conglomerate, Faith finds herself running for something far more important. Playing Mirror’s Edge Catalyst, you’ll…2016-02-04T17:00:38.000Z

2008’s Mirror’s Edge introduced gamers to a unique world where parkour ruled. We all got to be a part of the game’s bright industrial city as Faith, a “Runner” who transmitted messages to underground contacts while avoiding the wrath of a ruthless government. Developer DICE has decided to reboot her world and delve deeper into her origins with the release of Mirror’s Edge Catalyst. We spent some time speaking with the game’s Narrative Director Christofer Emgård to learn more about everything that went into crafting DICE’s approach to Faith’s new storyline..

What inspired the development team to expand on Faith’s origins?

One of the early goals we set for ourselves was to have Faith change and evolve with the main story. And for her to change we had to know who she is when the game begins. What choices and experiences got her there? And how did they shape her personality? Trying to answer those questions is what inspired us to expand on her origins. We had to dig deep into her background and relationships, and that of the city of Glass and its denizens as well. We ended up with quite a lot of lore and that gave us a great foundation for creating not only the main story of Catalyst (and the preceding Exordium comic) but the many smaller side-stories as well.

What corporation will she have to contend with this time around?

A member of KrugerSec’s security forces.

KrugerSec is the main security and police force in the City of Glass (and all of Cascadia) and their personnel is tasked with enforcing order both on the streets and the rooftops. Faith will face off against them as she moves across the city, and her actions early on also makes her a personal enemy of Gabriel Kruger, the powerful CEO of KrugerSec. But all the large corporations are complicit in the ongoing oppression to some extent, and some more than others…

How are you going to tackle the themes of corporate corruption and user privacy rights within the game?

The society in Mirror’s Edge is driven by fear and envy – the regular citizens live in constant fear of losing what they have, while at the same time envying the unattainable lives of those above. The Corporations that make up the Conglomerate are more than happy to fuel these base emotions as it makes for willing and malleable workers, and in Glass we showcase this through the advertisements and newscasts that are shown on billboards all over the city.

Privacy and personal freedom was not overtly taken from the citizens. In the story we hint at how they gladly gave it away, little by little, in exchange for the latest bling or social software platform. And when they one day began to regret their decisions it was already too late. The Conglomerate was in total control and privacy was a thing of the past.

Describe the different types of factions Faith will come into contact with.

A few of the members that represent “Black November.”

The Conglomerate rules Cascadia and its citizens. It consists of thirteen corporations, each owned and operated by a Corporate Family. Complex alliances and rivalries define the inter-corporate relations, and they all vie for better positions on the Conglomerate board.

The runners are a group of diverse individuals living off the grid. Though officially banned by the Conglomerate, the corporations rely on the runners to act as secret couriers and corporate spies for hire when needed. KrugerSec therefore partly turns a blind eye to runner activities, except for the occasional crackdown. But all that changes soon after Faith is released from jail.

In direct opposition to the Conglomerate and KrugerSec stands Black November, an underground revolutionary movement dedicated to freeing all of Cascadia from the corporate tyrants. But while their ultimate goal might seem noble, the means they are willing to use to get there are less so. Rebecca Thane, the Black November leader, has even gone so far as to suggest that civilians are viable targets if it serves the cause.

Who are some of the main adversaries and allies Faith will encounter?

Faith makes an enemy of Gabriel Kruger, head of KrugerSec, early on in the game, but as for who else she might antagonize I want to leave that for the player to discover. Her main allies are found among the other runners, and especially in her mentor and adoptive father Noah. As the story progresses she will make new acquaintances outside of the runner community, some of them friendly, some not, and all of them will have an impact on her evolving personality as she tries to find her place in the world. 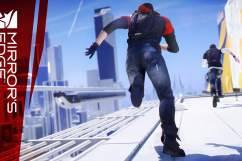 Read More
EA, Electronic Arts, Games, Interviews, PC Games, PS4, Xbox One
In the first part of our exclusive coverage on EA and DICE's Mirror's Edge Catalyst, we chatted with the game's Narrative Director to get some info on "The Rise of Faith."