**Note: Multiplayer is not included in this review, simply because the servers will have to be tested once the game releases on May 10th. We’ll update accordingly, but in our multiplayer testing so far (2 hours), it’s a generally great experience**

We’ve come to expect a certain level of greatness when it comes to Naughty Dog’s games. With so many quality games under their belt — Crash Bandicoot, The Last of Us, and the other Uncharted games — it’d be hard for us to not simply expect a game to be great just because it hails from Naughty Dog. So our expectations were already high coming into the studio’s latest game, Uncharted 4: A Thief’s End, but how does it stack up to the rest of the games in the series?

There’s certainly a lot to love about Uncharted 4, and there’s a lot to unpack after finally finishing its campaign (I just finished it at 1 AM this morning — thoughts are fresh!). The way in which Naughty Dog chooses to tell its stories has always been a favorite of mine, seamlessly blending the majority of their cutscenes into gameplay. It’s a brilliant way to tell stories to gamers, especially if you want them to actually pay attention to it. Sure, there is an option to skip the cinematics, but doing so in Uncharted 4 should be considered a gaming sin; they’re all brilliant in every aspect. The story is well thought-out, the voice-acting is absolutely sublime (thanks to voice vets Troy Baker, Nolan North, Emily Rose, and newcomer to video game-voicing Warren Kole), and the pacing is incredible. It’s a non-stop, action-filled thrill ride that doesn’t stop for anything. There’s a great deal of variation in the story, too, and without spoiling anything, you’re getting a lot of interesting variation in how Nathan Drake is portrayed. I’m not going to get deep into the story in this review, because I don’t want to potentially spoil anything (and it’s tough to talk about without spoiling).

I’ll also go as far to say that Uncharted 4 is a cinematic achievement, as far as video games are concerned. Stunning sweeps of the landscape, interesting camera angles, and brilliantly placed mishaps are all key factors in making this a great game.

There’s no shortage of action sequences, either. In fact, Uncharted 4 contains one of the best action sequences in a video game to date, and without spoiling anything, it involves an absolutely epic car chase.

As far as the visuals are concerned, Uncharted 4 is the best-looking game on the PS4, hands down. And, that’s not a hyperbolic statement, either; it undeniably pushes the PlayStation 4 to its limits. The environments are all colorful and gorgeous, and there’s a great deal of variety in what you’re looking at. From incredible-looking tropical waters, underwater shipwrecks, the muddy landscape of Madagascar, and more, the game is filled with awe-inspiring, jaw-dropping, tap-your-friend-next-to-you-while-saying-“look, look” visuals. But, it’s the numerous little tidbits that were clearly added as an afterthought that make the game a cinematic dream. For example, at one moment, you’ve climbed nearly to the top of a cliff, and as you’re hanging off of it, staring out into the ocean next to you, an incredibly realistic-looking flock of tropical birds fly by in the distance. I’m not sure what it is about that moment, but it was one that made me say, “Wow, this is incredible.” What’s more, there are many more “wow, this is incredible” moments contained in the game.

Sound design also deserves a nod, especially for helping Naughty Dog achieve the realism they’re looking for. Diving into water doesn’t sound cheap like it does in many games (it sounds like someone actually diving into water), the jungle around you is as noisy as it should be, and you can tell what gun an enemy has by the sound it makes because their noises are so varied. The soundtrack is also top-notch, and it’s used as a powerful tool to drive emotion. 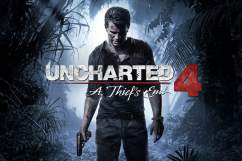 Speaking of emotion, Uncharted 4 does a brilliant job at conveying the emotions of its characters, not only through realistic dialogue, but also through visual representation. There’s nothing worse than watching a cutscene in a game in which the facial animations don’t match up with the words that are being spoken; that’s not the case in Naughty Dog’s latest. Conversations all sound and look natural, and don’t feel forced, which helps immerse the player in Nathan Drake’s world and care for the characters in it. The game’s only minor flaw is that the end of the game — the last 30 minutes or so — feels a bit dragged out, throwing away all of the expert pacing for the rest of the game before it.

With all that being said, Uncharted 4 is now the best PS4 game of 2016. Whether you’re talking about the best video game story, the best visuals, the best sound design, or simply the best overall game, the answer is Uncharted 4. It’s hard to imagine the possibility of an Uncharted 5, as I’m not sure how the developer could give us something better in the future. But if anyone can do it, it’s Naughty Dog, and Uncharted 4 proves that they’re the king of storytelling, and the game should serve as a challenge to all other developers to top it.