Update: the official reveal trailer for Call of Duty: Infinite Warfare (plus a brief look at Modern Warfare Remastered) has been released early and can be viewed below. The archived live stream feed can still be seen below as well.

Activision and Infinity Ward planned something pretty clever for the reveal of its next Call of Duty release. Fans solved a few puzzles tied to the next game through social media channels. The code has been broken and our reward is a live stream presentation for the next game.

If the latest leaks are anything to go by, we all know what we’re going to see. Call of Duty: Infinite Warfare looks and sounds like it’s going to take us even farther into the future. Action-packed space battles in a Call of Duty entry? Maybe we’ll get to see some extensive gameplay focused on this hopefully universe spanning shooter. Our hopes are also high that Infinity Ward will properly announce the release of a remastered edition for Call of Duty: Modern Warfare, too. Something tells us there’s going to be some juicy details revealed during this latest live stream.

In the meantime, check out this Call of Duty heritage video and bask in the greatness of the series alongside its long line of developers. 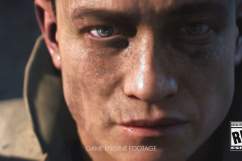