At last year’s E3, no one expected Bethesda Softworks to put on such an impressive stage show. Not only did they give us a public demo of DOOM, they gave us one of the best announcement of the entire show: the arrival of Fallout 4.

Now that we’re heading into E3 2016, Bethesda is up at bat once again to present their 2nd ever showcase. If the rumors end up becoming true, then you can all expect to see another amazing show. We may just see The Evil Within 2, a sequel to the Wolfenstein reboot, a Skyrim remaster and maybe even a revival of Prey 2. And don’t forget about Dishonored 2. We hope and pray they give us some type of news regarding new DOOM single-player DLC (which we’d rather have over more multiplayer bonuses). Whatever gets shown off here will be sure to make some jaws drop.

Make sure you stay here with us during Bethesda’s live E3 2016 press conference. 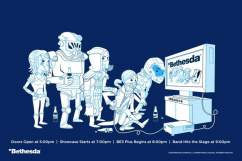