We have some great games lined up for you this month. And of course, they come free of charge. So there’s no risk involved with these awesome playable endeavors into several gaming genres. We’re covering the gamut here, folks – a Japanese action RPG, pinball action mashup, card battler, match three puzzler and a good old fashioned shoot ’em up. Hopping into these games and knocking out a few hours whilst staring down at your phone is definitely going to happen. Take our recommendations to heart as we break down the top five best new free Android games of May 2016.

There’s a vast amount of mobile action RPG’s that exist within the endless vacuum that is the Google Play store. The entry that we’re listing here is one of the few we put our stamp of approval on. Based on the anime, Elsword: Evolution is a fast paced side-scrolling beat ’em up that has the visual splendor you’d expect from it. After you choose your character class, you’ll head out into the game’s beautifully animated universe and take down a myriad of vicious creatures. You don’t have to head into battle alone; selecting and training your own powerful mount is a very viable option in battle. You can also choose to pit yourself against other players and test your mettle. Or you can choose to buddy up with them and form a clan. For fans and even non-fans of the source material, Elsword: Evolution worth a try.

Hot on the heels of the franchise’s first feature length film comes this brand new Angry Birds game. Angry Birds Action! keeps the lovable destruction the series is known for and blends in some pinball action. Red and all the birds that make up his cavalry arrive once again to cause some mayhem. Only this time, they’ve morphed into wrecking balls who can crash through obstacles on stages that look just like classic pinball tables. Each bird comes with their own special abilities, so it’s best to make good use of them and unlock anything and everything. This new spin on the Angry Birds formula is worth diving into. Now go out and save those eggs! 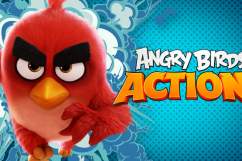 The world of Skylanders has mastered the art of toys come to life in video game form. While its been an unstoppable force on consoles and handhelds, its never been a big player on mobile devices…until now. Due to Kaos’ evil machinations, it’s up to you to amass your favorite hero cards and save the Second Dimension. This card battler employs the use of physical cards, which you scan into the game for some augmented reality gameplay. There’s 300 cards to add to your collection, 3-character teams to dominate with, single-player missions to complete and tough PvP battles to partake in. Consider this game a version of Hearthstone that your young ones would certainly enjoy.

Anyone’s who’s been around since the freshman days of mobile games has played one of the OG’s of match-three puzzlers. In 2016, this long-running series has gotten a new treatment in the form of Bejeweled Stars. Your puzzle solving prowess will be tested when you encounter new gems, Charms that perfectly capture your personality and game-changing SkyGems power ups. As you run through a near endless run of match-three puzzles, you’ll begin to notice your progress as pretty Constellations fill up the night sky. Enjoy this new foray into the world of Bejeweled and add another match-three puzzler to your download queue.

Bullet hell shooters (more specifically vertical scrolling ones) are always a pleasure to play through. Dodging an onslaught of bullets, holding down the fire button to lay waste to incoming ships and taking on screen filling bosses are always the name of the game. Squadron 1945 employs the winning formula for mobile devices, so new gamers can get a taste of one of gaming’s toughest genres. There’s four separate four warplanes to choose from, 30 stages to fly through, two different maneuvering modes, bonus items to collect and achievements to unlock. Squadron 1945 is a top-notch bullet hell shooter. 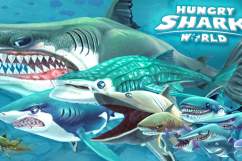