The series that brought us creepy mansions, vicious BOW’s and refined survival horror gameplay has been in a rut lately. Fans have had to deal with disappointment thanks to lackluster releases, such as the 6th main entry and the ho-hum Operation Raccoon City. E3 2016’s reveal of the 7th main entry has renewed confidence in the long-running franchise and now everyone is excited about Resident Evil again. But we have to make one more pit stop before Capcom’s biggest action/adventure IP makes its grand return. Umbrella Corps may appear to be a side project with tons of potential. But in reality, it’s a dreadful multiplayer shooter that’s lifeless and not even worth a 2nd glance.

First, let’s talk about the good. Umbrella Corps embraces every bit of RE’s storied history. The evil Umbrella Corporation has finally been wiped out, but their valuable research still lingers on in key locations. As a hired mercenary for a shadow organization, you head into several familiar danger zones with your teammates and attempt to recover those secrets. All the while, you’re fending off the best (worst?) of Umbrella’s bio-weapons. Fans will most certainly get a kick out of returning to old stages, such as the village from Resident Evil 4, the ravaged Raccoon City from Resident Evil 2 and Umbrella’s own research facility. The fan service is in abundance here. There’s a vast amount of cool customization items and weapons that harken back to everything Resident Evil is known for.

But sadly, that’s all the good that exists within this uninspired shooter. The solo missions are meant to help train you for the online portion of the game. But these tasks quickly grow super repetitive and the difficulty level ratchets up to a ridiculous level. Recovering DNA samples again…and again…and again while fending off hordes of monsters all by your lonesome just isn’t fun. Once you ditch the leaden single-player, all that’s left to get involved in is the multiplayer. The One-Life Match and Multi-Mission modes are built for efficient co-op tactics. There’s a lot of good ideas present: a zombie jammer that allows you to avoid the undead, an option that lets you grab a zombie as a shield, a powerful melee weapon that can be charged up etc. But the gameplay falls flat and doesn’t do enough to make these cool ideas worth exploring.

Some of the stage layouts are much too small. It only takes a minute or so to run through the entire map, which leads to quick matches and bad respawns that set you right next to gunfights and the opposite team. Sure, the stages look decent. But looking good isn’t enough to hide the fact that most of them are as big as literal sandboxes. All the guns feel incredibly off; none of the firearms you’ll equip have any oomph to them. Getting a kill is even much of a tougher task thanks to the player camera that’s damn near stuck to the back of your mercenary’s head. There will definitely be instances of you wishing the camera was scaled back a bit just so you cAN have an easier time lining up your shots. There’s a lot of cool ideas at play here, but the actual feel of the gunplay and character movement will take you out of the experience entirely.

Resident Evil has been through the wringer far too many times. Umbrella Corps is just another example of a deviation from the norm that falls flat on its mutated face. The lackluster single-player missions do nothing but throw you into boring objectives with little ammo and overwhelming odds. The gunplay doesn’t feel potent enough to be make you proud of your kills, plus the horrible movement animations are an eye sore. Longtime fans will get a kick out of seeing old locations and cool customization items. But that’s where the compliments end. Don’t waste your time with Umbrella Corps. 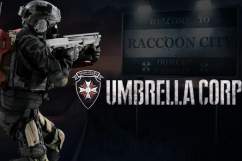