Just about everyone has been drawn in to the new free-to-play mobile game Pokemon Go, and that includes famous celebrities, as Justin Bieber was recently spotted trying to catch them all in New York City.

According to the New York Daily News, on Monday morning, many Pokemon Go players flooded central park in order to catch a Garydos that had appeared in the area. Many were surprised to find Justin Bieber himself making an appearance, supposedly exiting a car surrounded by body guards at 12:30 a.m.

Although some users captured photos and video of Bieber, it seems the vast majority of those in attendance were completely oblivious that he was even there, as they were mainly focused on catching the Garydos.

Pokemon Go is a mobile game that works by having players explore the real world. The game’s map is actually just the player’s GPS, and Pokemon will randomly appear around the player, especially at major landmarks and tourist attractions. Gamers must leave the house and explore their surroundings in order to play the game.

Luckily, when a rare Pokemon like a Garydos appears, that doesn’t mean only one player can be the one to snatch it; every gamer who arrives can catch the Pokemon for themselves, thus preventing fights that would inevitably break out as players attempt to hunt down the rarest species there are.

This is the second time in a week that massive crowds have amassed around Central Park to catch Pokemon. On Friday night, dozens of players stampeded into the area in an attempt to catch a Vaporeon, with the scene being captured on video. Some even stopped their cars and left them running as they attempted to hunt down the Pokemon. Check out the full video below: 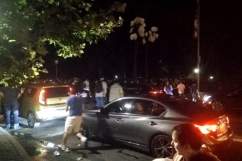