The faces of Pokemon Go‘s team leaders are no longer a mystery. In the new massively popular mobile game, players are asked to pick between three teams upon reaching level five: Team Instinct, Team Mystic or Team Valor. Each team has a human leader, but for weeks nobody knew what they looked like.

Who is Spark, exactly? Well, in his introduction in the game, he mentions that he believes Pokemon have excellent intuition, and he speculates that this intuition may be related to the way the creatures are hatched. He goes on to say that if we trust in our instincts, anything is possible.

The general philosophy of Team Instinct and of Spark himself, then, is a belief in oneself; for comparison, Team Valor is associated with strength and passion while Team Mystic is associated with tranquility and wisdom. Some people, though, just pick their team based on what color or bird they like best.

Team Instinct is generally the least popular in the game, and so it has become a meme to make fun of the group and of its leader, Spark. They’re generally painted as being somewhat aloof, as due to popularity alone, the major online competition has really been between Valor and Mystic with Instinct off on its own.

Spark looks like the type of guy who would Naruto run down the street singing the pokemon theme song.

Pokemon GO leaders at a bar

candela: assert yourself, spark
spark: thats my pokemon!
candela: great! now let him have it!
spark: you can have it!

I can tell Spark tries so hard, to be hip and happenin, to be the very best but at the bottom of the stairs misses the last step and eats it

Candela: I will show you Pokemon's true heart through strength!
Blanche: Knowledge is the key to victory
Spark:*wheels past on heelies*

Still, Instinct has plenty of passionate followers, and since their leader was revealed, many have put together some fabulous fan art of Spark. Here are some of the best pieces of art you need to see. 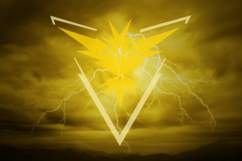