Pokemon Go’s Team Instinct is driven by trust in the Pokemon. (Niantic)

If you’re a member of Team Instinct in Pokemon Go, you may feel like you’re the only one. But you are not alone! Although Instinct is the least popular of the three Pokemon Go teams, that only makes it more appealing to its members, who have gathered together online to celebrate the magic of the Zapdos and the joys of trusting in oneself. Instinct is the true underdog of the Pokemon Go universe.

On Reddit, many of the team’s members have gathered together on the team’s official subreddit, which they sometimes refer to as The Power Plant. Reflecting Instinct’s relationship with lightning, the team’s motto on Reddit is, “There Is No Shelter From The Storm.” That motto is present in much of their brilliant fan art, including wallpapers optimized both for desktop computers and for smartphones.

Via Reddit, here are some of the best Team Instinct wallpapers. If you’re a Reddit user, be sure to head over to the individual posts of your favorite pieces and give the original creator an upvote. 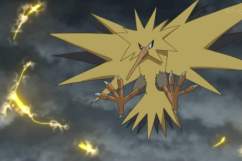