It’s about that time once again.

You probably downloaded a bunch of duds through the Google Play store already. We’re always here to separate the best Android action games from the absolute worst ones. With this list of games, you’ll have no trouble maintaining your sanity during this stifling summer heat. Ignore the muggy weather and get caught up on all these action-packed games. Those famous fighting turtles return in a new awesome game, plus we have some titles that delve into intense running n’ gunning.

With the latest TMNT film out in theaters, new video games of some kind were sure to follow. Ninja Turtles: Legends hit the Google Play store and provided turn-based battle action gameplay. Not only can you amass an army of those popular fighting turtles, you can also obtain a bevy of other great franchise characters. The main campaign will help your grow your army and travel to several recognizable locations and face off with a ton of the turtles’ most powerful foes. The PvP battles are bound to keep you entertained as you head into battle alongside characters such as Metalhead and Tiger Claw. Ninja Turtles: Legends is worth exploring if you’re a hardcore TMNT fan.

Raid HQ is an interesting mix of Metal Slug’s shoot ’em up military action and the strategic setups of similar mobile games. You’re put into the commander role and it’s up to you to build up an impenetrable fortress. All the while, you’ll gather up animated gun toting mercenaries and turn them into your most trusted army. The run ‘n gun levels move a fast and furious pace that never grows tiresome. Once you effectively shut down competing enemy bases, you’ll perform all the duties necessary when it comes to keeping your base intact and defended from outside threats. Raid HQ’s cartoony visuals and high-octane battles are immensely entertaining.

Top-down RPG’s are still all the rage these days. Especially the ones that offer a a high level of difficulty and a limitless offering of dungeons to venture through. Redungeon enters the market and brings with it all the elements that make games of its kind so admired. Your lil’ blue knight is always in constant danger thanks to the abundance of traps and dangerous enemies looking to take your life. Over time, you’ll gain the skills and fast reaction times needed to stay alive a few seconds longer. There’s new dungeon explorers to unlock, a beautiful 2D shade of cartoony visuals to take in and an awesome soundtrack composed by Dave Cowen (Leap Day, Rust Bucket). Redungeon is a good time built on classic action RPG elements.

Have you been searching out for a quality mobile 3rd-person shooter? Gun Glory: Anarchy (Real Time) is the latest game in the genre that should have a place on your Android device. As your chosen mercenary, you’ll hop from cover to cover and stick your head out when it’s time to shoot down your enemy assailants. There’s a nice variety of weaponry to arm yourself with, such as plasma cannons, flamethrowers and bayonets. Maintaining your high kill count is just one of the main activities that will keep you addicted to Gun Glory. Make sure you’re fully prepared for the PvP gunfights and help your band of mercenaries fight the good fight.

There’s a vast amount of GTA clones all over the Google Play store. And surprisingly, a lot of them are halfway decent. Chicago Crime Simulator 3D manages to transport you into the city of Chicago, where a lot of debauchery is going down. Everything you’ll find yourself engaging in fits perfectly on the list of great 3rd-person games. You’ll drive designer vehicles, embark on dangerous missions and become the most dangerous individual on Chicago’s digital streets. Chicago Crime Simulator 3D will allow you to act out your most guiltiest pleasures right on your mobile phone. 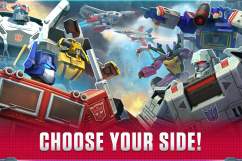