Monday Night Raw premiered a brand new theme song on July 25th’s episode, one of many changes meant to signal the start of the New Era.

The new theme song is entitled “Enemies” by Shinedown. It replaces the old theme, “The Night” by Kromestatik, which has been a part of the show since 2012.

This was not the only major change fans saw on Monday Night Raw this week. A brand new title sequence went along with the song, and there was also a new set, new logo, a new desk for the commentators, and even new red colored ropes in the ring.

This is the start of a new era for Monday Night Raw. It’s the first show following the recent brand extension, during which all the performers were split between Raw and SmackDown. As Stephanie McMahon pointed out on July 25th’s episode, the show also no longer has a WWE Champion on it, as the current champion, Dean Ambrose, was drafted to SmackDown.

As a result, it was announced that Raw would be getting its own championship belt, called the WWE Universal Championship. Seth Rollins will fight an unknown opponent for this title at SummerSlam next month.

For more on this week’s Monday Night Raw, check out our full rundown of the evening’s events below: 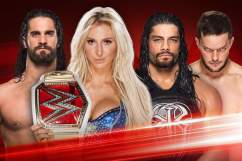