Koei Tecmo has seemingly come upon a winning formula for its newest Musou games: incorporate popular and beloved anime franchises into the beat ’em up stylings of Warriors games. So far, the worlds of Fist of the North Star, One Piece, Arslan: The Warriors of Legend have gotten the video game treatment (Berserk is getting prepped for a hack and slasher later this year, too). In an unexpected move, the main dev behind the Warriors series have ventured out of their comfort zone for a foray into a new manga/anime: Attack on Titan. Instead of cutting down nameless, worthless soldiers, you’ll fight to keep humanity intact by flying high and dismembering Titans. The end result of this new project? Surprisingly good.

Attack on Titan will give folks who haven’t kept up with the show and its most passionate fans a chance to play through the series’ 1st season. The main story mode throws you into the most memorable scenarios and lets you wield the high flying gear worn by its key characters. The basic premise of this game’s plot is as follows: humans are forced to live behind three tiers of walls due to the overwhelming threat of bloodthirsty Titans. Humanity lived without fear for years until the Titans began smashing through those protective walls. In response to such an overwhelming threat, several units of armed forces have been trained in order to combat the human eating Titans. As you converse with your fellow protectors and attain/upgrade gear, you’ll get more insight into every upcoming mission. Thankfully, there’s a wealth of tasks that adds new stories and deviates from the 1st season episodic formula.

The cel-shaded visual splendor this action game sports have to be commended. They do a fine job of replicating the art style depicted in the manga/anime. If you’re watching from afar, you’d be forgiven for mistaking this game for an entire episode of the anime itself. The Titans, towns and main characters are animated to perfection. The outstanding gore effects tend to make those one hit Titan kills look, sound and feel so rewarding when you pull them off. Speaking of killing Titans, you’re going to be doing a whole hell of a lot of it. To do so, you’ll have to master your gas-powered thruster gear to stay airborne and your sharpened dual blades. When it’s time to engage with those hideous Titans, you’ll need to target their limbs in order to eliminate them entirely. The thrill of hacking the main weak point of a Titan and saving a fellow soldier from their grasp always feels super heroic.

While most Omega Force developed games tend to grow a bit stale and tiresome the longer you stay with them, Attack on Titan actually avoids that issue in our eyes. When that feeling starts to seep in, a different type of demur comes up. There are interesting instances where you’ll need to blast cannonballs at an invading Titan, hop on your trusty steed to hunt down Titans outside of town and even control a Titan who’s a melee powerhouse. Plus taking on each and every mission becomes all the more lively when you’re aligned with humans online. Saving the world from Titans is a livelier endeavor when your pals are nearby to help you do so. The bloody action becomes that much better due to the riveting and impactful soundtrack. The orchestral tunes help make each close encounter with the Titans a lot more impactful and nail biting.

While the battles themselves manage to keep things fresh over time, the low difficulty is a sore spot. Not once during our playthrough of this game did we truly feel threatened by a race of monsters that should be way more terrifying. It’s pretty easy to wrap your head around the main premise of moving around all types of Titans and just cutting down their targeted body points at the right intervals. The game doesn’t do enough to raise the challenge level as you continuously grab high marks during every mission. We just wish things got gradually tougher over time. Another issue that tends to mess up the action is the sometimes uncooperative camera. When there’s multiple Titans and airborne allies onscreen, the camera gets a bit confused on who to focus on. You’ll most certainly be in situations where you can’t get a proper hit on your target because there’s just too much happening within your viewpoint.

Omega Force has managed to create an Attack on Titan game that matches up just right with its anime/manga roots. The dark and troubling world each playable character lives in is rife with humanity’s greatest struggle in the form of hungry Titans. It feels amazing to stand up to those gigantic creatures as you zip through the air and tear through a mixture of threatening monsters. The main campaign does a great job of replicating the 1st season’s events, plus it presents additional plot points to keep longtime fans interested. The visuals are strong, the soundtrack is on point and the action itself is enjoyable. We just wish the act of taking down Titans weren’t such an facile task that doesn’t increase in difficulty that much. And the problematic camera can make things look quite messy at times. Attack on Titan still manages to be a solid hack and slasher that fans of the show will admire. 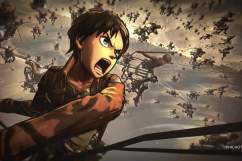 ‘Attack on Titan’ Game: 5 Fast Facts You Need to Know