Deus Ex: Human Revolution brought us into a future scenario where human augmentation has become an accepted part of society. But after the closing events of the game’s global attack by augmented civilians, this is no longer the case. Adam Jensen has aligned himself with a new secret organization in order to crack down on the world’s most dangerous criminals, human and augmented. But he also has a vested interest in figuring out who or what is behind the continued anarchy and desecration of the world he resides in. Deus Ex: Mankind Divided not only presents a plot with deep ties to today’s current issues, it also streamlines the mechanics that were need in improvement from Human Revolution.

Adam Jensen finds himself as a part of a civilization that looks down upon augmentations and the people equipped with them. Further regulations have been put upon them, and as you wander around the varied open environments, you’ll overhear angry denizens expressing their disgust for their kind. All of the major missions you’ll embroil Adam Jensen in deal with taking down criminals who are tied to the current struggle between humans and augmented beings.

As before, big choices have to be made in order to remain some semblance of order and lessen the chances for even more unbridled chaos. The story itself starts off big with a action packed intro sequence and from there it continues to throw in shocking moments over the course of the whole game. We not only have to commend Mankind Divided for doing right by its futuristic espionage roots, we also have to give it props for speaking on the social racial issues plaguing our real world today.

When it comes to Adam’s varied arsenal, his augmentations get a much needed boost. When you wake up to see your unlocked hidden powers, it becomes clear that you’re even more of a threat than you originally became in Human Revolution. It becomes a fun ability tree type puzzle as you decide which powers to turn on/off in order to maintain your body’s stability. The improved control schemes and weapon wheel enhances the gameplay even more than before. Having the ability to survey an area before you bust in guns blazing, shock multiple enemies and quickly dash from cover to cover is possible. The stealth elements are still an important factor here; it’s also possible to smash through a wall and turn completely invisible in order to avoid any unneeded confrontation. Adam can avoid gunfights altogether during intense social interactions, hack into modules for more info and do so much more. There’s tons of ways to approach each and every encounter.

Content wise, Mankind Divided is plentiful. The main campaign runs long, but thankfully it gets better the farther you get caught up into its background conspiracies. Adam Jensen’s bigger side missions can be accessed from a separate mode altogether, which are cool excursions that delve into the plot a bit more. But most importantly, the new Breach Mode is the most feature heavy piece of additional content there is. These hacking missions test your penchant for stealth and properly taking down the defense mechanism within each server. Climbing up the leaderboards, taking on more challenging levels and gaining new tools for the main campaign helps this mode prosper. This is just another solid piece of a total package that offers hours upon hours of worthwhile content.

While Mankind Divided works for the most part, we ran into a few technical issues that interrupted our fun. Framerate dips reared its ugly head from time to time, plus the music would occasionally stop altogether during conversation sequences. There were even a few strange instances where the NPC’s that help move the story along didn’t bother talking to us at all. The long load times are also an issue we hated having to put up with after dying repeatedly during the game’s tougher missions. There’s even instances where the game feels a bit choppy when the action gets a bit more hectic. It’s easy to fix these issues via an upcoming update, which is something that we’re hoping will come sooner rather than later.

Deus Ex: Mankind Divided sticks to a formula that still works. We were pulled into a world strife with bigotry, covert organizations and pure chaos as a powerful augmented agent looking for answers. The game’s constant push to help you discover the truth behind the world’s declining health comes through in the form of a great story. The gunplay, stealth and new augmentations do a great job of keeping things fun while you help push along the plot. There’s so much to do, see and hack into throughout Mankind Divided’s full content suite. While the bevy of technical problems halted our fun from time to time, we still couldn’t wait to head back into Adam Jensen’s fragmented future. 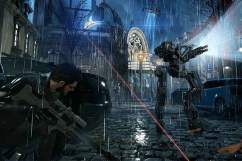 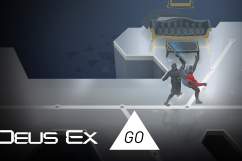