What will it be like to walk your own Pokemon? (Nintendo)

Pokemon Go trainers have been scouring the code of the latest release, searching for hints of what features will be coming soon in the game. They’ve found one that’s particularly exciting: a Pokemon Go buddy system. This means that in a future update, you might be able to take a Pokemon buddy for a walk and earn candy as a reward. But how exactly could this system work? Niantic hasn’t said anything officially about a buddy walking system, but these are the clues that trainers have picked up from reading the game’s code.

Pokemon Size Will Affect How You Walk Your Pokemon

The code has a section called “BuddySize” and refers to BUDDY_MEDIUM, BUDDY_SHOULDER, BUDDY_BIG, and BUDDY_FLYING. This likely indicates that when you’re walking your Pokemon, the animation may show a Pokemon flying next to you or a very tiny (extra small) Pokemon riding on your shoulder.

You Could Get One Candy for Every 3km Walked

The code is indicating that you’ll be rewarded a certain amount of candy for walking your Pokemon. It’s called “GetBuddyWalkedResponse” in the code, Pokemon Go Hub reported. Some players on Reddit have joked that this apparently means your Pokemon will “poop” candy when you’re walking it.

The code also indicates that you’ll need to walk a Pokemon for 3 km in order to get one candy. (However, this could change once — or if — the feature is publicly available.) This is doable, unless you’re one of the unlucky people whose distance isn’t tracked correctly by Niantic. In that case, it might take a lot longer just to get one candy.

Walking Distance May Be Tracked Like Egg Distance Is Tracked

This part is bad news to Pokemon Go players, who have been having quite a bit of trouble with their game not accurately recording how far they’ve walked. But it looks like the app is going to get data on how far you’ve walked from the server side, which Pokemon Go Hub reported is similar to how the app currently determines how far you’ve walked for hatching eggs. The new file added to the code, called “BudyPokemon.proto,” tracks the start distance and the last awarded distance for a Buddy Id.

Will There Be Minimum Requirements for Walking Your Pokemon?

The Buddy Walk code changes are all recorded on the Aeon Lucid GitHub here. One section discusses networking responses to fort deployments. According to the Pokemon Go subreddit, the “fort” in the code refers to Pokestops. When the code lists errors for “FortDeployPokemonResponse,” they include errors for a player not having a team, an error for a Pokemon not being at its full HP of 7, an error for a player being below the minimum level of 8, and an error for a Pokemon being a buddy. We’re not sure what this section means, but it appears there will be something you can’t participate in that requires a minimum level, minimum HP, a team selection, and not using the buddy Pokemon. Perhaps it means that you can’t assign a buddy Pokemon to a gym? So far, Pokestops haven’t been affected by your level or your team selection, so it’s unclear what this means.

It also appears, due to the GetBuddyWalkedMessage and SetBuddyPokemonMessage codes, that you may only get to walk one Pokemon at a time. So choose wisely!

Which Pokemon are you going to walk first if Niantic makes this code fully functional? Let us know in the comments. 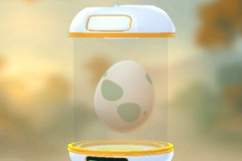 ‘Pokemon Go’ Incubator: How to Fix the Distance Tracker for Hatching Eggs