Pokemon Go encourages players to be social, and it’s made much more enjoyable by joining together with those in your area to capture gyms and share information. One of the best places to find fellow Pokemon masters is on Reddit, where literally hundreds of active Pokemon Go communities now exist and thrive.

The major hub is simply called Pokemon Go, and it’s your one-stop shop for everything related to the game, whether it’s information about the latest update or the funniest memes of the day. Then there’s The Silph Road, which will be appealing to those interested in exploring the game’s mechanics in depth; players break down spawn times, drop rates of different items, and more using lots and lots of data.

There are also subreddits based around the game’s three teams: Team Mystic, Team Valor and Team Instinct. On there, players swap experiences, submit fan art dedicated to their team, and generally trash talk their two major opponents.

Finally, there’s Pokemon Go Stories, where users share experiences they’ve had playing the game, and the Nurse Joy Project, which is all about using Pokemon Go to do good in the real world.

But Pokemon Go is inherently a regional game, and so it’s helpful to communicate specifically with users near you. Luckily, there are subreddits devoted to nearly every major city around the world, from the United States to the United Kingdom and beyond.

Here are all of Reddit’s major regional-based Pokemon Go subreddits. If you don’t see your city or town on the list, there probably isn’t a subreddit of it yet, but you can always create one for yourself here. 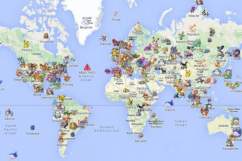 ‘Pokemon Go’: List of Countries Where the Game is Available