In new Pokemon Sun & Moon gameplay footage leaked by Japanese magazine V Jump, an in-game side quest where the player throws the sea cucumber-like Pokemon Pyukumuku back into the ocean is shown.

Pyukumuku was originally leaked by CoroCoro in a magazine scan on August 10. It was leaked with its Japanese name “Namakobushi,” and was described as a sea cucumber-like Pokemon.

Its English name was released the following day by Nintendo.

Pyukumuku is a pure Water-type Pokemon. According to the official Pokemon website:

Due to their appearance and their lifestyle, Pyukumuku are considered unappealing to tourists. Part-time work chucking Pyukumuku back into the sea is available at tourist beaches. But no matter how far they’re thrown, Pyukumuku will always return to the same spot.

Once a Pyukumuku finds a place it likes, it won’t budge from it. If someone moves it away, back it comes to the same spot. If it runs out of food to eat in that spot, it’ll stay there—and starve. The people of Alola found this so pitiful that they developed a tradition of chucking Pyukumuku back into the food-rich sea whenever they come across any thin-bellied Pyukumuku.

Pyukumuku are covered with a slippery, viscous fluid that has a moisturizing effect. Pyukumuku can stay on land for a week without drying out. The people of Alola use this fluid for skincare products.

Pyukumuku hate to have their spikes and mouths touched, and if you step on one, it will hurl out its fist-like inner organs to strike at you.

Pyukumuku has a new Ability, Innards Out, which no other Pokémon has had before. With the Innards Out Ability, when this Pokémon faints, it will be able to deal one last bit of damage to its opponent, equal to the amount of HP it had left before it received the final blow. 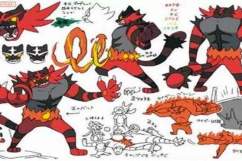