Australia has been selected as the main hub of Forza Horizon 3’s racing festival. This change of scenery is sure to keep franchise fans excited as they discover all types of alternate routes and locations to drive through.

Playground Games, the uber talented development team behind this upcoming racer, have worked out the kinks from the last game and have made sure to improve upon its more positive aspects. Ralph Fulton, the Creative Director at Playground Games, took some time out of his busy schedule to speak on everything new in Forza 3. This sequel looks to up the ante even more than before by offering an even bigger map to explore, new Showcase Races and Bucket List challenges to complete, a multitude of new cars to drive etc.

Before you finally burn some rubber on September 27, check out this exclusive interview where we get some details on the game’s choice of region, soundtrack selection and so much more.

What caused the development team to move the game’s Horizon Festival to Australia? What was the process like when it came time to research the locales being featured in the game?

When choosing locations for Forza Horizon 3, we wanted a beautiful, diverse setting with great driving roads for players to enjoy. With its tremendous variety of ecotypes and stunning natural beauty, Australia is a natural fit for the Horizon Festival. We think fans are going to love racing here and exploring everything that makes this version of Australia so special.

When we decided on Australia as the location for Forza Horizon 3, we undertook an extensive research phase. The first step was to identify all the locations we wanted to include in the game, so we created mood-boards containing imagery of different types of scenery and specific locations all over Australia. We cast the net really wide, because Australia is a huge country, and our intention was to create a map which reflected its amazing diversity while still working as a videogame.

Once we’d identified the areas we wanted to include, we sent teams to research each on location. They drove the roads, filming in HD everywhere they went, and they stopped to photograph everything we’d need to build the game: road surfaces, buildings, fences, trees, rocks, everything. We use a cutting-edge technique called “photogrammetry” which allows us to turn hi-def photos of objects into game-ready 3D models and that’s how the rocks and tree trunks, among other things, look so realistic in our game. We also created an entirely new technique for capturing authentic Australian skies using a custom-built, 12K HDR camera rig and we camped for the entire summer in a field capturing everything the sky did during that time. These images were brought back to the studio and fed through a custom process that streams the data into our system, producing the most dynamic, evolving skyscapes ever seen in a game.

We have video screens in our studio which, throughout development, constantly played the videos we recorded driving all over Australia. That way, even the members of the team who weren’t able to visit Australia felt completely immersed in the world we were building.

What makes the social elements of this sequel an improvement over its predecessor?

Forza Horizon 3 features an all-new, four-player campaign co-op experience and supports up to 12 simultaneous players in Online Adventure and Online Free Roam, with fully synchronized civilian traffic, weather and time of day. In Forza Horizon 3 you can also create and join Clubs of up to 1,000 members to expand your network of friends and rule the leaderboards. These Clubs enable you to meet up, socialize and compete with your friends and other like-minded players.

With four-player co-op play, you can play together with up to three other players to tackle any and all of the challenges in the game. Even better, all the credits, cars, and XP you earn with your friends will seamlessly carry over to your game once you go back to solo play. The four-player co-op experience is one of coolest features we’ve ever had in a Forza game and I think players are going love it.

We’ve also got new features like Horizon Blueprint, where you can customize new race events to your liking. Choose the cars you wish to use, the routes you want to drive, give your event a name and then share it with your friends. The Auction House also makes its long-awaited return to Forza as well; put a new car on auction and then rake in the credits from the resulting bidding war, or head to the Auction House and search out the perfect car to add to your growing garage in the game.

Finally, Forza Horizon 3 will feature Xbox Cross-play, where Xbox One and Windows 10 players will be able to play together seamlessly regardless of which platform their playing on. So no matter how you like to play, or what platform you want to play it on, Forza Horizon 3 is all about variety and fun.

What are some of the more standout cars being added to the game’s massive garage?

Forza has the largest and most diverse car lineup of any racing franchise of this generation. The diversity of cars in the game matches the geographical diversity of Australia, so it’s a curated mix. When we choose the cars we want to bring to the franchise, we have a number of lenses. One of them is always what we call “new hotness” – the hottest, most innovative cars which are coming to market during our development period. The perfect example of that is the Lamborghini Centenario, which adorns our cover on Forza Horizon 3. Through our relationship with Lamborghini we heard about, researched and built this amazing car before it had even been announced to the world at Geneva and it is the perfect hero car for the game. But we have numerous other lenses which we apply as well – we are always trying to source and research hard-to-find classic cars, and bring fan favourite and cult classics to the game as well.

Thanks to our Australian setting, we’ve got more off-road vehicles than ever before in this game, from dune buggies like the Penhall Cholla and the Ariel Nomad, to off-road monsters like BJ Baldwin’s trophy truck. We recently announced that the famous Warthog from the Halo series of games is available in the game as well.

We also wanted to reflect Australia’s unique car scene as an important aspect of the game. There are many facets to Aussie car culture which are important to Australians, and which we think will be really interesting to players from all over the world. The rivalry between Holden and Ford, the long tradition of Utes, and the national obsession with V8s are characteristics of life in Australia, and we couldn’t make a game set there without celebrating them. The 1951 Holden 50-2106 FX Ute and 2014 HSV Limited Edition GEN-F GTS Maloo are just a couple of examples of cars highlighting this that we can’t wait for fans to test drive in the Outback. 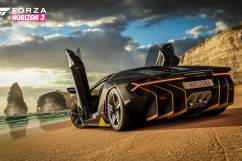 The music behind these open-world racers has been pretty strong thus far. Which radio stations have been curated this time around?

Our goal is to enable you to drive to the music you love, and Forza Horizon 3 does that through a variety of options. First, we have more radio stations as part of the Forza Horizon 3 original soundtrack with a broader musical remit than any Horizon game before. On top of returning favorites like Horizon Pulse and Horizon Bass Arena, several new stations add new and classic hits from genres across hip hop, indie rock, punk/metal, and of course, classical music. We also teamed up with some of the hottest indie music labels including Vagrant Records, Epitath Records and Hospital Records to help make the music in the game something truly special. In addition, a new Microsoft Groove station lets players stream music from their personal collection on OneDrive or from the millions of songs found with a Groove Music Pass while playing their game.

What are some examples of the new Bucket List challenges and Showcase races making their debut here?

Forza Horizon 3 includes a variety of races that reward you for your speed, skill and style behind the wheel. Forza Horizon 3 career and online play includes a variety of action-packed race modes which can occur at any time of day or night, in dry or wet weather, making full use of the game’s wide-open world. Alongside circuit and point-to-point races on paved, dirt, or mixed surfaces, there is a new Street Race career that culminates in midnight battles against Horizon’s fiercest competitors. And of course, Forza Horizon 3 will feature thrilling Horizon Showcase events, this time pitting you and your car against unusual opponents, including a fleet of powerboats, and even a giant zeppelin!

Our Bucket List challenges in Forza Horizon 3 have been designed to test your skills as a driver, and give you a chance to try a range of vehicles in the game. We have a number of pre-built Bucket List challenge events that everyone can try and they run the gamut from setting a certain speed target, to seeing how car you can jump, or how many skill points you can rack up in a certain time. 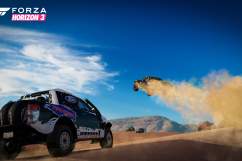