Mini Warriors: Three KingdomsOnly battles with thousands of participants are worth fighting! Cute Three Kingdom characters will help you take over the world on your mobile phone! 2000 mini soldiers fight alongside one another in 25vs25 battles! Experience the thrill of a battle with the greatest number of participants in history!2016-09-01T02:58:23.000Z

Here are the top 10 tips/tricks/cheats you need to know for Mini Warriors: Three Kingdoms.

1. Make Sure Your Kingdom is Strong

• Pay close attention to how your kingdom is constantly strengthened. You should make it a priority to upgrade the overall level of your Monarch since it leads to you being granted with stronger buildings, troops, generals etc. You’ll be able to recruit your own General from the General Platform.

• Prioritize your upgrades in the following order: Monarch, farms/sawmills (to gain more resources), troops in the Barrack, Strategy (in order to better your tactics in battle) and your Warehouse (which increases your storage capacity). Upgrading your Strategy level helps boost your Monarch level, by the way. And make sure your Barrack troops level is on par with your Monarch’s level.

• You should have three main goals in mind when you venture out into the game’s huge world: obtaining loot, expanding your empire across it and making sure you conquer it in the end. When it comes to the whole obtaining loot part of the game, you’re more likely to gain all types of special loot when you take down a kingdom that’s a higher level than yours.

• Always take a look at your troop’s layout before heading into battle. You should properly adjust your army’s outlet according to the army’s outlet you’re about to engage in battle with. It’s a viable strategy to set up your Cavalry into one line in order to prevent your enemy from easily attacking the rear. Whenever possible, take down a rival army’s back line in order to bring a quicker end to an ensuing battle.

5. Make Good Use of Your Strategic Abilities

• There are some efficient Strategy abilities worth utilizing during every battle. For example, “Squall” is a powerful attack that’s capable of swiping an enemy’s back line (upgrading this attack should be high on your priority list). “Allure” is another powerful attack that can be activated as a defensive maneuver. This ability is a counter move that helps protect your rear line when its under attack. 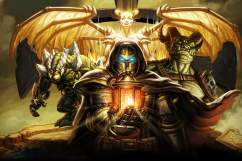