While this is not a huge week as far as game releases go, there are definitely a few new video games this week as well as console ports that are worth noting.

The official release date for NBA 2K17 is this week, although it’s likely that most fans preordered the Early Tip-Off Edition and received their copy last Friday. If you’re one of the dedicated fans still playing Destiny, you’re undoubtedly aware of the impending release of Rise of Iron; if not, it may be a good time to revisit the game. Even if you’ve never played before, you’ll be able to buy the entire collection as a bundle and boost a character to level 40, so it might be worth trying. Shin Megami Tensei IV: Apocalypse, which was extremely well-received when it released in Japan in February, is being released in North America and is one of a number of big 3DS releases this fall.

In an effort to keep you up-to-date on the latest game releases, we will continue compiling this list on a weekly basis. Keep an eye out for this and all your other gaming news at Heavy.com.

Criminal Girls 2: Party Favors (Vita): The sequel to Criminal Girls and Criminal Girls: Invite Only was first released in Japan last November, and is now getting a North American release (albeit with a few changes). You will guide the seven Delinquents as they climb the Hell Spire to complete the Reformation Program; each of the girls has a unique story to uncover, and one of them may even secretly be a Convict. Some of the artwork and terminology has been changed for the Western version, and the Motivation scene text has been removed completely due to potential perceived consent issues. The game will not be dubbed in English; rather, all the dialogue will be Japanese with English text.
Dear Esther: Landmark Edition (Xbox One, PS4): Dear Esther started out in 2008 as a mod for Half-Life 2 and was remastered for a full commercial release in 2012 for PC. It is an experimental exploration game drops the player on a deserted island, where they must guide the protagonist in a slow walk around the island as he delivers a fragmented narrative about himself and what happened to his wife, Esther. It probably toes the line as far as being considered an actual video game, but it is a beautiful story and unlike anything you’ve ever played before.
Destiny: Rise of Iron (Xbox One, PS4): The latest expansion for Bungie’s popular first-person shooter, which revolves around the Fallen (who have breached the Wall surrounding the Cosmodrone in Old Russia), will feature a new campaign, missions, PvE locations, PvP maps, gear, a raid, and a new zone on Earth called the Plaguelands. The new PvP mode is called “Supremacy” and is a 6v6 game similar to Call of Duty‘s “Kill Confirmed”. Artifacts will be receiving an overhaul as well.
Destiny: The Collection (Xbox One, PS4): This collection includes the base Destiny game along with every expansion released to date, including Rise of Iron, along with a level 40 character boost.
Jazzpunk (PS4): This bizarre comedic adventure set during an alternate-reality Cold War era first released for PC back in February of 2014. It’s now coming to PS4 with new content added to the single-player campaign mode and a 4-player splitscreen multiplayer mode.
Killer Instinct: The Definitive Edition (Xbox One): Killer Instinct is an entirely different game now than it was when it first released with the Xbox One. The Definitive Edition will pack all three seasons into one disc (or download) for $39.99 USD. This edition of the game will also include EVERY Killer Instinct fighter available, as well as all 20 stages, complete with visual upgrades and lighting changes. What’s more, it’ll come with the original Killer Instinct 1 & 2 classic arcade editions.
NBA 2K17 (Xbox One, PS4, 360, PS3, PC): 2K’s latest NBA title certainly looks to be its best offering yet. It has smoother and quicker gameplay than we’ve seen in the past 2K games, bringing an all-new level of realism to NBA video games — even more so than last year’s title. This year brings tons of new animations and impressive new dribble moves, and player likenesses are the best we’ve seen yet. NBA 2K17 is sure to please basketball fans around the globe.
Shin Megami Tensei IV: Apocalypse (Nintendo 3DS): One of Japan’s best RPGs of 2016 will finally make its way to North America this week. It’s a post-apocalyptic role-playing game that takes place in the 2030s following a devastating war between the angels and the armies of Lucifer. Now, Tokyo’s population is ruled by angels and demons, and one teenager will step up to save Tokyo and, in turn, save himself. The game currently holds an 86/100 on Metacritic.
Slain: Back from Hell (PS4): Technically-speaking, Slain: Back from Hell is actually a rebranding and relaunch for Slain, the game that originally released earlier this year to less-than-stellar reviews. Now, three months after its initial release, it’s having a re-coming out party, bringing major changes along with it. First, the game’s difficulty curve has been adjusted and new checkpoints have been added. Secondly, boss encounters have been adjusted, and new abilities have been added. Dialogue has been entirely re-scripted, and according to its developer, Wolf Brew, they’ve “significantly changed and improved pretty much every single element of the game’s look and feel”.
Tokyo Twilight Ghost Hunters: Daybreak Special Gigs (PS4, PS3, Vita): This visual novel originally released in Europe in 2015, but the enhanced version is making its way to the west this week. The new version will feature an expanded story with new scenes that show characters’ internal feelings, as well as an entirely new ‘Daybreak’ scenario. It will also have an improved battle system that will allow players to perform multiple actions during ghost battles.
Wheels of Aurelia (PC): Wheels of Aurelia is an intriguing setting you don’t often see in games: a road trip! It’ll play like a narrative road trip meets a racing game, and it’s set in the roaring Italian 1970s — a time of political unrest in the country. It plays like an old-school isometric arcade racer, but you’ll be able to chat with your passenger while you’re driving. Depending on the dialogue choices you’ll make in the game, you could find yourself in a car chase, illegal street race, or in a tense debate with your passengers. 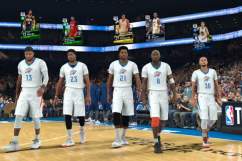 Agenda (PC, Mac, Linux): Agenda is a strategy simulation game that tasks the player with controlling a worldwide independent agency who wants to dominate the world. Players will try to claim their global influence through alliances and covert operations, including assassinations, bribery, and fraud.

Warhammer 40,000: Eternal Crusade (PC): We’ve seen so many Warhammer 40k games, that we’re starting to lose track of which game is which. This coming Friday, yet another Warhammer game will make its way to PCs in the form of Eternal Crusade, a player versus player MMO action shooter set on the planet of Arkhona. The game will feature numerous playable races, including Orks, Space Marines, Edlar, and Chaos Space Marines. The game has been in early access since January, and it’ll finally get a full release this week. The reviews are mixed, but it appears as though there is at least a bit of fun to be had on Arkhona.