This is a message from @PalmerLuckey, the founder of @Oculus. pic.twitter.com/CWlAA8ugMx

A report has surfaced about the political affiliations of Oculus’s founder, 24-year-old multimillionaire Palmer Luckey, who we now know has been secretly spending some of his fortune on funding an unofficial pro-Donald Trump group that focuses on anti-Hillary Clinton memes.

According to the Daily Beast, Luckey is a financial backer for Nimble America, the Trump promotional group that promotes the presidential candidate through online and real-world advertising utilizing viral images. They describe themselves as a “social welfare 501(c)4 non-profit”

Palmer made his considerable fortune when he sold his virtual reality company Oculus to Facebook back in 2014 for $2 billion. Forbes lists the young VR tycoon as #26 on their list of America’s Richest Entrepreneurs Under 40 and estimates his current net worth at around $700 million.

The group lists its founders on their official website, and reportedly had Luckey listed as Vice President under his alter ego “NimbleRichMan” (although he insists that his contributions are solely monetary). It also listed right-wing activist Milo Yiannopoulos – notorious for his recent ban from Twitter for harassing Ghostbusters star Leslie Jones – as a “silent partner”, and indeed he can be seen commenting to show his support on one of NimbleRichMan’s Reddit posts. The listing has since been removed, however.

NimbleRichMan and Nimble America have both been active on Pro Donald Trump Reddit posts, stirring up controversy among Trump supporters on the site. The group made a post earlier this week in which they asked for donations and promised that NimbleRichMan would match any and all donations made over a 48-hour period. In one post, they tout the power of “shitposting” and boast that they’ve “conquered Reddit”. The account NimbleRichMan and the above post claiming that he has “already donated significant funds to Nimble America” have since been deleted. 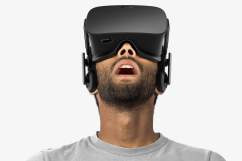 How & Where to Pre-Order the Oculus Rift