What type of ball does the Pokemon Go Plus throw? (Gamestop)

The Pokemon Go Plus, Niantic’s new wearable accessory, is now being released in stores. One big question on players’ minds is what type of ball the new device uses when you’re catching Pokemon. When you press the button on the device to catch a Pokemon, what type of ball does it throw? Is there any way to choose between types of Pokemon Go balls?

The Pokemon Go Plus only throws Pokeballs when you use the wearable device to catch Pokemon. And from what players on The Silph Road are reporting, you only get one throw per Pokemon. Redditor Zyb0r reported that he only gets one throw and then the Pokemon is either caught or it flees. You also can’t choose what type of throw you use. You just get a regular straight throw, not a curve ball, and there’s no option for getting a Nice, Great, or Excellent throw.

You also can’t run away from an encounter with the Go Plus device. But when you only get one throw per Pokemon, is there really a need to run away?

If you run out of Pokeballs while you’re trying to catch Pokemon, you’ll have to get more Pokeballs. It won’t switch to using Great balls or Ultra balls. In addition, trainers from Reddit’s The Silph Road discovered that the wearable gives normal XP, candy, and stardust from catching Pokemon with the Plus device, and you get 25 XP if a Pokemon flees.

In addition, you can’t choose to spin a Pokestop instead of throwing a ball at a Pokemon. Redditor Zyb0r reported that the Pokemon Go Plus appears to always prioritize Pokemon over Pokestops.

One of the main complaints so far from Pokemon Go trainers is that the device isn’t very useful if you’re over Level 20. At this level, it is much more difficult to catch Pokemon using normal Pokeballs, especially with only one throw. So if your’e at a higher level, you may have a tougher time catching Pokemon if you’re only using the Plus device. 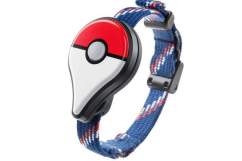 ‘Pokemon Go’ Plus Guide: What Do the Red, Green, & Blue Lights Mean?